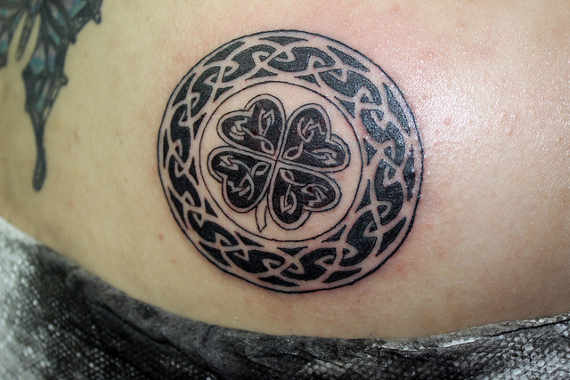 The four-leaf clover grew its reputation in Ireland, just like other popular Irish tattoos, during the fifth century. It was during this period that Saint Patrick was introducing the world to Christianity, and somehow the two became closely associated.

The clover originally represented the Holy Trinity, and Saint Patrick used that legendary meaning and the abundance of the plant growing along the countryside to express his passion for religion with the people.

Today the four-leaf clover tattoos has a huge variety of meanings that date back to those times as well as some unique connections that have made this a popular choice for many visiting the tattoo parlor.

Dating back to the time of Saint Patrick, the clover has been associated with the Father, the Son, and the Holy Spirit. These three representations were further expanded upon in later years, representing faith, love, and hope which are also connected with arrow tattoo meanings.

The four-leaf clover tattoos can be a representation of one of these ideals or all three. By including the text boldly within the clover, a person can show their preference towards one or the other.

The spiritual passion that Saint Patrick had towards religion make it easy for those to connect their heritage or beliefs to these ideals.

The Spiritual Connection to the Plant

The clover has long been connected to Irish heritage, and today many people love the four-leaf clover tattoos to simply show their love for their family history.

Many people have a deeper connection to nature, and they associate the clover leaves with a more spiritual meaning.

This unique flower can represent the qualities of a goddess, time, their god, or the balance of all the energies. The clover is also associated with respect, love, health, and of course wealth.

The Luck of the Irish

Somewhere along the way between Saint Patrick and future generation, good luck became closely associated with the four leaf clover and horseshoe tattoos.

In fact, it is such a rare plant, anyone who was in possession of one was thought to have instant good luck appear in their life.

Today, people wear the tattoo of the four-leaf clover to carry around that good luck with them wherever they travel.

The uncommon four-leaf clover can represent a rare breed, being one-of-a-kind, a unique soul, and someone who marches to the beat of their own drum.

The fourth leaf of the clover today is a representation of man combined with the original Holy Trinity. This unique union has a very deep religious affiliation for many.

Today many people associate the four-leaf clover tattoos with a huge variety of meanings that have little to do with the original Celtic culture. The clovers can represent financial gain, growth, achievement, and good health.

The clover tattoo can be filled in with an Irish proverb or the names of loved ones who have gone. The clover is most always associated with the powerful color green in one shade or another.