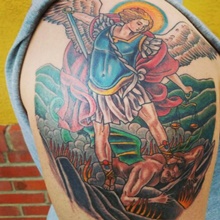 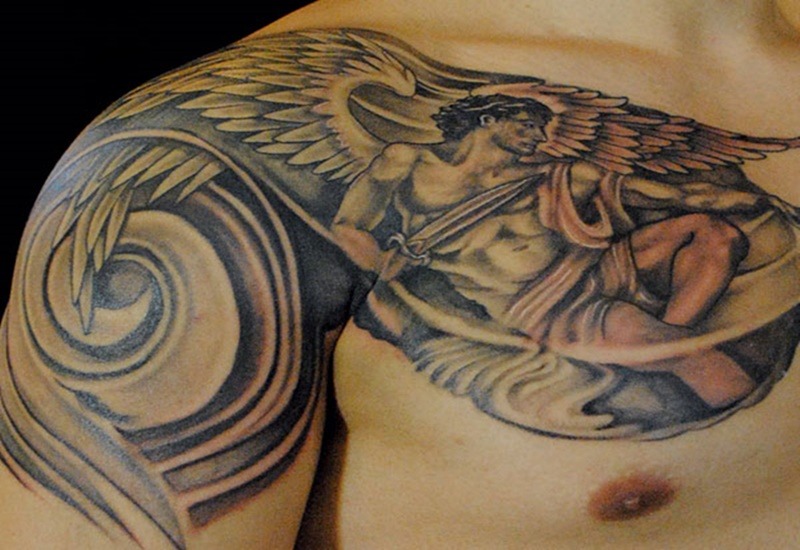 Saint Michael tattoos are fast becoming one of the most popular designs for a multitude of reasons. For those who may not know all about this historic angelic figure, he is the Lutheran, Anglican, and Catholic representation of the archangel Michael. This powerful angel is a dominant figure in Abrahamic religions, Christianity, Islam, and Judaism, a uniting figure of all.

This is one powerful tattoo that has very deep, powerful, and meaningful representations for those bold enough to get the Saint Michael tattoos.

The History of Saint Michael

The only thing that you have to know about Saint Micheal is that he single-handily defeated Satan. His monumental victory made him a superstar in his own right, and today he is looked upon as the most powerful of all the angels.

Those who get inked with the Saint Michael tattoos associate their body art with power, dominance, courage, strength, justice, and bravery. This warrior brings out the best in those who admire him, connecting with his righteous stance on being a champion for good versus evil.

He can represent for some defeating the evil hold of a terrible relationship, having grown from a reckless childhood of crime, or growing into the person who protects their family at all costs.

The Associations with the Warrior

Most people who get the Saint Michael tattoos also have that warrior mentality. These body ink lovers exemplify the courage it took for Saint Michael to defeat the Angel of Death, and they love how their images represent being a protector, defender of justice, and a healer.

The majority of these tattoo designs are drawn with Saint Michael holding a sword that he uses to pierce into the heart of all evil to defend the heavens and earth.

The Saint Michael images often have large wings and a body covered in armor, many times with bright beams of sunlight to symbolize his strength, power, and dominance. Most ink lovers get Saint Michael colored in white and black tones to help preserve the image quality.

Due to all the details involved with drawing Saint Michael in tattoo form, the design tends to be quite large. This only adds to the allure and the symbolism of him being a larger than life angel who took on the forces of evil head-on and was victorious in the end.

In addition to Saint Micheal being representative of power, goodness, dominance, victory, strength, commitment, excellence, and love, other parts of the tattoo design hold significance too.

When the clouds are drawn in the design, this is representative of the heavens. Beams of light are utilized to symbolize this archangel’s glory. Small winged demons being pierced by Saint Michael’s sword symbolize a victory over an addiction, abusive relationship, or a troubled past.

Saint Michael tattoos depicting him raising his sword triumphantly in the air are meant to represent the warrior spirit within. Some choose to add verses from the prayer to Saint Michael to personalize the design. Using words with personal significance like protection or defend, can symbolize one’s protective power over their own family from evil.