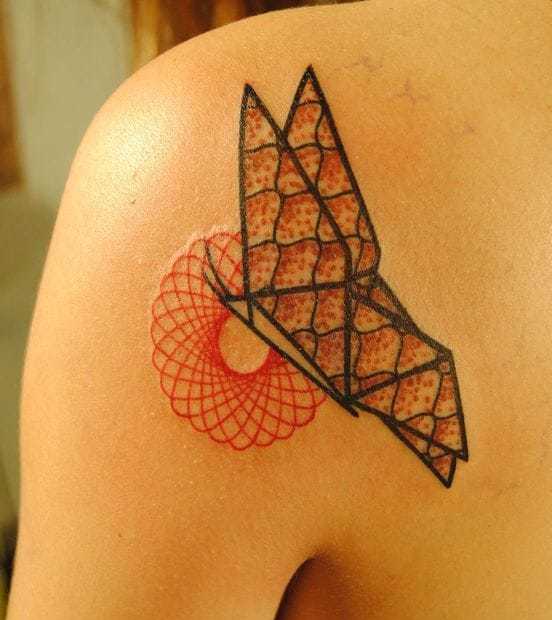 Origami is a Japanese art technique that goes back to the Song Dynasty and it was mainly used for rituals. Back then, many people folded the paper in different shapes that represented items or animals that were connected to a person. It was mostly used at funerals as a symbol of the soul and in some traditions, they were burned to set the soul free. Today, this amazing technique has been accepted all around the world. The name stays the same and people make stunning shapes that look so beautiful that everyone wants to have one or learn how to do it.

The Meanings Of The Origami Tattoo

The shape of the origami has a precise geometrical look so imagine how these magnificent paper-folding models look as tattoos!

It is an amazing design that looks so great on the skin that many people considered it as a tattoo. Origami is a very popular design that usually is connected with those patterned geometrical images of animals and other items that we often see in adult coloring books.

When it comes to the meaning of the origami designs we will explain some of them for you to have a clearer picture if you choose to tattoo one.

The Origami Bird is the most popular among them all because of the symbolism it represents. The traditional Japanese origami bird is the crane. In Japan, this bird is considered a mythical creature that leaves a very long time and brings good fortune and health. This is the most common origami bird that we see and very often it is a choice for a tattoo because of its popularity.

Another popular origami bird is the swan. The swan represents loyalty so if you are deeply loyal to someone or two people (a couple) are loyal to each other they can ink two origami swans to seal their relationship. We all know how loyal the swan is to its partner and if one of them dies, the other one dies from a broken heart. How romantic!

This design is very popular among girls because it represents beauty and grace. There are so many different shapes of the wings that you can choose from to make your tattoo beautiful. We all know that at first, it is a caterpillar that turns into a butterfly so sometimes this can mean that someone has been spiritually reborn again.

This symbolism is also connected to the Japanese tradition and it has deep spiritual meaning. A second chance was given to a person to fix his/her mistakes and shine with its purity and beauty. They call it Chocho and as origami can be seen in many shapes.

This design is often a choice of men. It symbolizes power, strength, wisdom, and success. It is the most ancient symbol in Japan that has a serious traditional meaning. There are stunning tattoo designs of an Origami Dragon and so many different concepts that always look amazing without a doubt. The dragon’s shape has a lot of details so imagine what you can do with folding paper and how complexed it can look. This tattoo is a true challenge so if you can connect with those meaning mentioned above you should accept this challenge and ink true art on your body.

It is an endless choice of other origami animals, mythical creatures, and items for a tattoo. The combinations of traditional origami and modern art techniques are gorgeous so whatever you choose it will not be a mistake.  Also, the paper plane is considered an origami, and it looks great. Often it symbolizes a bird and can have both meanings. The cat symbolizes independence, the fish represents freedom, the frog is an origami that is often added to people’s cars or in their purses and backpacks which means that it represents safety. So if you add an origami frog tattoo you will be safe for the rest of your life!

When it comes to the origami tattoos, the most popular color for these designs is black. With the new watercolor tattoo technique, people ink origami tattoos as line art above a watercolor shape. It is the most common tattoo and one of the easiest and less painful that gives an amazing final result.

Like all tattoos, there are large and small designs that are placed on the wrist, arms ( in a sleeve), on the back, on the neck, etc.. Also, there are tiny origami tattoos that look beautiful behind the ear.

The sleeve origami is something fascinating! Imagine all those edgy shapes precisely designed into something beautiful. There can be an origami dragon surrounded by all kinds of origami flowers and birds some in color some black and white.

Many people have origami tattoos with several birds flying that goes from the neck to the shoulder or across the whole arm. There are a lot of choices for a body placement of the tattoo. If you already have chosen your favorite origami tattoo you can talk to the tattoo artists to tell you which body part will be perfect for your design. In the end, all origami tattoos are unique because they are connected with the wearer’s personality so do a little research about your favorite animal, plant or item before you permanently add it to your skin.

Let’s check out some of the most beautiful origami tattoos: