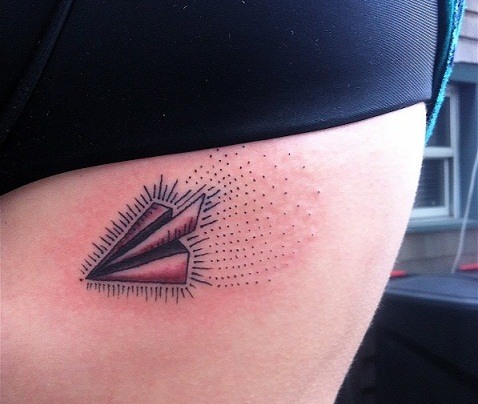 When you think about a paper airplane, what images and feelings does it evoke for you? If you said carefree, fun, and whimsical, then you discovered the appeal of the paper airplane tattoos with this new generation.

Tattoos are all about expressing yourself, and many talented and creative people today have found a way to get inked and still keep in line with their values, beliefs, and dreams.

Here are just some of the fun and whimsical meanings behind paper airplane tattoos:

The Love of Flying

Those who have a love of flying are not just dreamers with their heads in the clouds. They know at a young age that the sky calls them, and they spent the majority of their adolescence training, testing, and learning how to become a pilot.

Those who have gone all the way and earned the right to pilot those metal birds dotting the skies have come with a unique way to reward themselves. The paper airplane tattoos are usually folded in three parts, and these three parts represent the three pilot licenses needed to fly the big planes.

After they get their private, instrument, and commercial licenses, the little tattoo is a permanent reminder they finally got their wings.

The Writer in Us All

Writers are a rare breed. They toll away often in complete silence day after day, working on getting everything trapped inside out on to the paper. To the writer, the paper is the instrument in which they can express themselves, and the paper airplane represents for them the ability to take flight, to fly wherever they need to go to get ideas, to travel around the world without ever leaving their desks.

The paper airplane tattoos remind these writers that even though they may not leave the house often, their minds can roam anywhere and everywhere the wind blows, free like the paper airplane in the breeze.

The Meanings of the Paper Airplane Tattoo

This generation certainly has its share of creative and free thinkers. At no time in our history have people been afforded such an ability to do, be, and say anything they want without fear. These free thinkers have come up with simple and symbolic ways to represent complex feelings and thoughts with the simplest images.

The paper airplane tattoos for these folks represent throwing their life in the air and letting the wind take them where they need to go. A carefree attitude about not having any worries, not remembering where they started and not sure where they will end, and the ability to pick up and go where the winds of change blow.

Some people ink this tattoo with the shadow of the airplane which can mean that the shadow marks their care free attitude. It can also mean the person is connected to the ground like shadow of the plane on ground. No matter how far they go they will always be connected to their roots (or home town/country). Also, when designed with a shadow it gives a 3D effect of the tattoo and poping out like that it adds even more meaning to their free thinking and go with the flow decisions. It looks like its flying out of the skin which gives the tattoo even more depth. Sometimes people add a different shadow under the paper airplane like a bigger airplane or jet aircraft or a flying bird symbolizing body and soul.

The paper airplane tattoos also have a connection to Japanese pop culture. In this culture, the paper airplanes are representative of the ancient art of origami. The folded paper art in this design is symbolic of launching yourself, starting a new, creating a new beginning for yourself.

The paper airplane tattoos are easily recognized for what they are, but for the wearer they can have a much deeper meaning.

Whether this person is starting off on a new adventure or turning the page in a chapter of their life, they have little worries that the winds of change will blow them to where they eventually are destined to be.