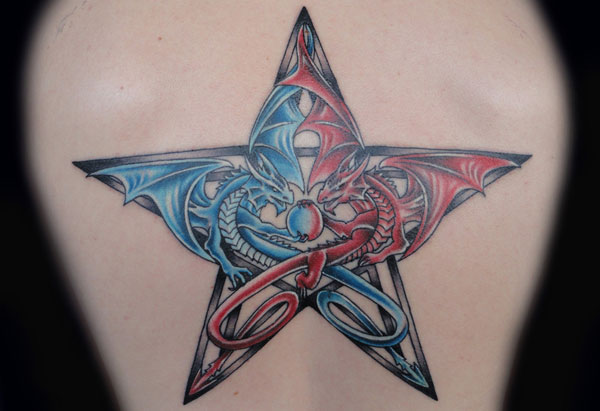 The nautical star tattoo has a long history of being recognized as an image that is associated with guidance and protection.

This is one of the reasons it is a popular choice with the military and marine, especially those in the Navy.

Although the basic star design can be quite vibrant, many tattoo artists have developed unique ways to incorporate other designs into the tattoo.

Here is a breakdown of the nautical star tattoo and it’s many meanings.

The Early Origin of the Nautical Star

The nautical star has closely been associated with a seafaring theme largely due to the superstitious nature of those people who would undertake long ocean voyages and search out symbols like starfishes and dolphins that would provide them good fortune.

Sailors who traveled on those dangerous open seas over a century ago utilized the heavens to navigate, and the star became an important part of those safe travels.

The nautical star was adopted as a sign of the belief the North Star would eventually lead them home safely.

The Military Connection to the Star

Soldiers have had a close connection to the nautical star because they associated it with guidance and safety.

During times of war, many soldiers would get the nautical star tattoo on their wrists to remind them when they were involved in very dangerous situations and that they needed to keep looking regardless of the danger and that the star would safely guide them home once their mission was completed.

The nautical star tattoo was derived from the original version of the compass rose, and today has many variations that have different meanings.

The original nautical star design has five points, with the uppermost point directed toward the North star Polaris.

Rather than having a flat tattoo design like the soldiers of years gone by, many people today prefer the three-dimensional design whereas each point has two different colors that give the star a 3D look design.

The nautical star tattoo with six points gets its origin from religious beliefs, and the star is supposed to be a representation of the Star of David.

A star with eight points represents the San Juan cross. Incorporating flames and flowers, or breaking each point so it can be displayed with many unique colors give the wearer the ability to incorporate their own meaning to the star.

Many lesbian and gay men utilize the nautical star tattoo to symbolize their own sexual preference.

Punk and heavy metal music fans use the star design to symbolize their love for their music.

The star design is unique in that it can have a very different meaning from one person to another.

The star can represent a light that a person follows or is guided by, a connection with someone who has passed, or the belief in a power bigger than us all.

The star has a great connection to home, whether that be on this planet or beyond.

This tattoo is quite common because it can symbolize a wide variety of meanings.