Dolphin Tattoos and Their Playful and Gentle Meanings 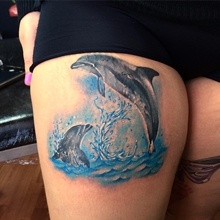 On the surface, the dolphin tattoos are fun, playful, and visually appealing, regardless where you get them inked on the body. Despite them being visually appealing, these tattoos can be embellished with a variety of other components to really make the meaning more profound for the individual.

Today, dolphin tattoos are just about everywhere, and regardless where you get them inked, they also have numerous meanings you should know about before you decide on this particular subject matter.

The History of the Dolphins

Dating back thousands of years, the dolphin has long been considered to be the “king of fish” by numerous ancient societies. The dolphin was held in high regard because it was thought of to possess kingly qualities.

These associations were not meant to represent the dominating type king, but the one that was looked upon with high regard and respect. At the core, the dolphin name was thought to represent grace.

Dating back all those years, anyone who was lucky enough to see this majestic animal swim or fly through the air could certainly make that connection to it being graceful.

The Dolphins Throughout the Years

The reason that many people connect with the dolphin is due in part to the numerous associations that have been connected to it over the years.

Ancient myths reveal the dolphin was seen as the protector of sacred water and wells. This creature was thought as of the watcher of the waters, and the guardians of anything in the sea.

The reason dolphin tattoos are popular these days is because they connect with a wide audience who see different meanings associated with this amazing creature. For some, the dolphin tattoos are symbolic of a playful side, transcendence, harmony, and gentleness.

For others, the dolphin represents intelligence, contentment, community, and friendship.

Throughout the years, the dolphin also has been associated with power, generosity, and resurrection. Fishermen tell tales of swimming sailors being rescued by dolphins, who would fight off shark attacks until help arrived.

The Uniqueness of the Dolphin

One reason that many people connect with the dolphin is the connection to duality. That means while you might think of a person as one thing, they have a power within that allows them to be seen in a different light.

The same can be said of the dolphin, active, vibrant, intelligent on the surface, and intuitive, powerful, and caring inside.

This dual association has a lot to do with the fact that the dolphins are one of a few animals considered to be both mammal and fish. The dolphin can breathe in water and on land and has been referred to as the one who can be in two worlds at once.

With so many associations connected to this amazing creature, it is no wonder the popularity of the dolphin tattoos has reached such heights. Incorporate various sea themed embellishments to make this fun and playful sea creature your own.