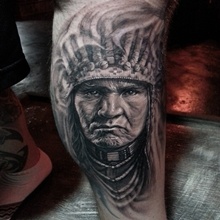 When you see somewhere who has Indian head tattoos, one of the first impressions you get is how powerful the imagery can be. Some choose to just get the head on the shoulder while others make use of the entire back or chest to get their point across.

There is a significant cultural connection to these designs, so do not enter into getting inked with the Indian head tattoos lightly.

The Design of the Indian Head

One of the reasons that you have to be very careful with the selection of your Indian head tattoos is because different tribes have different meanings associated with certain symbols and apparel worn by the warriors.

Many of these symbols have an association with the moon, stars, and sun, while others are representative of animals or thunderstorms. Many tribes had their own secret meanings for different symbols and some which conveyed different religious beliefs.

The best way to approach getting the Indian head tattoos is to understand more about the tribe, and then try to align the design in a way that corresponds with their beliefs.

The Connection to Ancestors

Some choose the Indian head tattoos because of a connection they have in their blood. Since they know their tribe, they know already which adornments will affect the design in a certain way.

These are very powerful designs because they allow a person to connect to their past and help to keep their heritage alive.

The Indian head tattoos can be symbolic of the chief or perhaps a relative who had to stand within the tribe. In this case, the design is more in tune with exactly how the tribe would have inked each other centuries ago.

You do not have to have Indian blood running through your veins to want to get the Indian head tattoos. These powerful and cultural designs could be symbolic of a deep respect for the tribe, and while the embellishments do not have to have a personal connection, the design of the head is more about other symbolic references.

In this case, the Indian head tattoos are representative of pride, power, connection, family, love, survival, respect, and appreciation.

For many who feel these people were not treated respectfully, the tattoo can be a gesture of good faith that will stand the test of time.

Regardless which tribe you’re associated with or if you simply are getting inked to pay tribute to a culture, the associations with the Indian head are extremely powerful. On the surface, those who get inked with this design symbolize a connection with the land, respect, power, family, and honor.

Whether the tattoo is representing a warrior or chief, they are meant to strike fear into the hearts of rival tribes, a symbol of perseverance and strength in trying times, and of a people who have endured the most challenging of times and still have a deep respect for everything they come in contact with.

Whether the Indian head in your design has an elaborate headdress or just one feather, the meaning is more about how these people respected the land and one another during their time.