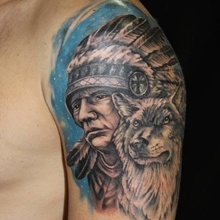 Native American culture has utilized body art in some form or another for centuries. Back before the concept of tattooing was popularized, these ancient warriors would get their body inked by way of a sharp bone dipped in colorful dyes.

The process of getting the body art was also very sacred to the Indians, and today many look back on that time with respect and admiration for people who cared about their planet, their people, and their way of life.

If you are considering Indian tattoos, maybe the following will provide you some creative inspiration.

The Mark of the Tribe

Long ago when Native Americans were decorating their bodies with different shapes and symbols, it was not to show off their creativity or ability to endure hours of piercing pain with a hammer and sharp bone piercing the skin.

Long ago, these different tribes would create a system of identification within the tribe by inking up with certain patterns. This identification system was more than just pride for the tribe, it held mystical and spiritual meaning for them too.

Many warriors believed the tattoo gave them added strength when they went to war, almost possessing a superpower. Today, the Indian tattoos can be representative of that power, strength, dominance, and persistence to overall against all odds.

Two of the most popular Indian tribes, as it relates to body art, were the Cree and Iroquois, tribes. The men in these tribes would get body art on their arms, legs, chest, back, basically, anywhere there was a blank canvas.

These warriors would even get inked around the eyes, chin, and lips, striking fear in those who would fight them. Iroquois men would get body art on their thighs to show off how many kills they had in battle.

Those with roots to Native American ancestors often get inked in the same manner as an expression of pride and respect for their elders. This connection to the tribe is more than a fade, this is a highly emotional and religious experience for many.

If you are looking to get Indian tattoos to connect with your ancestors, it is always a good idea to do your homework first because many of these images have different meanings to different tribes.

Tracing your native American roots will ensure you find the traditions and symbols that were held in the highest regards by that tribe, and then get inked accordingly. The connection with the past is powerful, and it can be symbolic of your design of pride, connection, strength, power, freedom, endurance, faith, love, and family.

When getting inked with the Indian tattoos, many accessories like feathers in the headpiece, jewelry, and weapons, all help to enhance the design.

The variety in which you can have your Indian tattoos drawn are limitless. Some have the skin ripping apart with the Indian breaking through the skin to show their roots.

Others use a skull in a feather headdress to harness a warriors spirit. Women tend to add the dream-catcher to the design because it adds a colorful touch to the design while still holding true to Native American traditions.