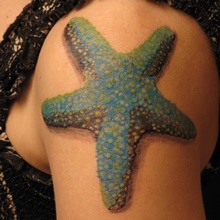 One of the most mysterious creatures in all the seas are the starfish. These little creatures area is all about being sensory, meaning their world is all about touching and feeling.

The nerves that run from the center of the starfish to the end of each limb is highly sensitive, and this is quite extraordinary for a creature with no brain. One might think this animal is lacking intelligence, but that is where you would be certainly wrong.

The sensory perception of this little sea animal connects with body ink lovers who know they feel more than they think and can relate on a deep level with the starfish.

The Meanings of the Starfish Tattoos

The reasons that little starfish is so appealing to those who adore body ink is the vast meanings that come with this bottom sea dweller. The starfish has certain characteristics like being mysterious, resourceful, perceptive, and sensitive.

These tattoos can also be representative of someone who is patient, strong, magical, and moves to their own beat. Not only are these creatures mesmerizing to look at, they connect with those who have a love for the stars, and see this sea creature as a representation of the stars under the sea as above.

Not only are these creatures mesmerizing to look at, they connect with those who have a love for the stars, and see this sea creature as a representation of the stars under the sea as above.

The Regeneration of the Starfish

One of the most amazing attributes of the starfish is their ability to re-grow a limb if lost in battle. Now while it may be impossible for humans to re-grow an appendage, the meanings associated with regeneration are quite appealing.

For those who get the starfish tattoos, this meaning can be symbolic of someone changing, or regenerating, their mindset, belief, of attitude.

Perhaps someone has experienced something bad in their past and the starfish for them says they have let that part of their life go and they are moving forward after having learned a valuable lesson.

The History of the Starfish

The starfish does have a deep history throughout the ages. With Christianity, the starfish is representative of the Virgin Mary who creates safe travel over troubled waters during trying times. In Egyptian legend, the starfish meaning has been connected to Isis, the mother goddess who was the mother and friend to slaves.

In Roman mythology, a starfish is the symbol of love goddess Venus, born from foaming tides of the Adriatic. Venus is connected with the starfish because she’s a sensory goddess. Native Americans carved the starfish into Haida totem poles to mark the lineage of the branch. They observed the starfish be super-strong and observed its ability to regenerate, deeming the starfish to be immortal.

While the starfish regrows a limb out of necessity, today people see this as a healing of sorts. Those who are struggling with health or emotional challenges can draw upon the powerful healing process of the starfish.

While the regeneration process is different for humans, at the core it simply means a person can find a way if they are determined to get past an addiction, abusive relationship, or loss of a loved one in order to facilitate healing.