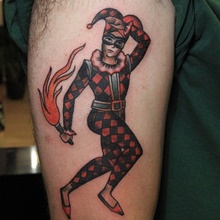 The jester has been around for centuries, helping to lighten up the mood in the royal court, but often taking things too far in an attempt to get laughs. Once the jester began poking fun and the king, queen, and other royal subjects, it wasn’t funny anymore to see them sent to the stockades or even beheaded.

Today, many people get jester tattoos because they represent the fun and the evil side of the clown, something that has mass appeal right now.

The Association With the Good Jester

The happy jester is the good clown, the life of the party, the one who can be counted on to find humor in just about any subject or situation. For many, this lighthearted person has qualities that make them fun to be around.

The happy jester tattoos are symbolic of joy, fun, passion, laughter, kindness, sharing, and a zest for living. These designs can be drawn in a way that makes a person smile just by looking at the image.

They can also work as a reminder for some to not take themselves so seriously, to look for the lighter side, to enjoy everything life has to offer.

The Association with the Evil Jester

Look at the movie Suicide Squad, the evil clowns are some of the most beloved and feared in the film. These designs used in a tattoo symbolize a desire to be unique, someone who loves to play off the fears of others, and people who love the idea of being way out there.

The evil jester is symbolic of someone without fear, someone with passion, a person who is laughing on the outside by plotting revenge on the inside.

The Meanings of the Court Jester

Some people have been labeled as class clowns their whole lives, and while some see this as a negative, it can actually be the opposite.

These silly jesters are actually some of the most creative spirits on the planet, and they utilize the jester tattoos to show others and themselves that they have something unique to offer the world, it might not be so apparent on the surface, however.

For these folks, the tattoo is symbolic of a struggle, a drive, determination, commitment, and focus that pushes them to be different in their own special way.

The Appearance of the Jester

One reason for the growing popularity of the jester tattoos is because they are colored with a huge rainbow of colors. The outfit the jester wears is different, just like how these folks feel and live a different life than the rest of us.

Their colorful exterior might be hiding a darker interior, one that is filled with hate, remorse, resentment, and revenge. The image is meant to keep those looking off guard, while the evil wheels of revenge spin below.

The jester has a dual meaning, good and bad, and some wearers have the jester’s outfit drawn in two designs to represent one person with two different personalities.