Musical Tattoo Meanings and Variations in the Designs 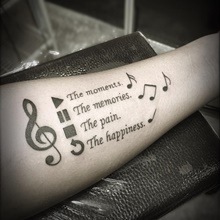 Music is a language on its own that simply transcends different generations and cultures. Treble clef tattoos that were inked several decades ago can have the same universal meaning to a kid getting his first ink of the same design.

For many, music is simply in their blood, it is their livelihood, and it is everything that they are or want to be. What better way to show the world that you have this deep and personal connection to music than by getting your very own cool music tattoos.

From guitar tattoos, ink with a music scales, to a heart-shaped treble clef, these creative ink designs appeal to just about everyone while they allow you to show off your creative side as well.

Musical tattoos represent a deep emotional connection to instruments, songs, and musicians, and are a timeless choice that will only continue to grow in popularity.

The History of the Music Tattoos

To see where music tattoos got their start in history, we have to go way back to primitive tribal cultures. Back then, music and spirituality were considered one, and quickly became part of many rituals throughout the world.

Spiritual beliefs and ritualistic observance linked tattoos and music together forever, something that is still alive and thriving today.

The most obvious intersection of body ink and music occurred back in the early 1970s when heavy metal and punk rock were in their early stages.

Both punk rock and heavy metal hinge on bucking the norm and being anti-social, and what better way to do that than with guitar tattoos, cool music tattoos, and lyrics tattoos.

Although the tattoos from several decades ago were more in your face than a representation of the love of all things music, times have certainly changed.

Today, people will get inked with their favorite guitar legend, they will ink the lyrics from their favorite songs, and some will even use a symbol like a cassette or 8-track tape to symbolize a love of music from a certain era.

Artists today can take something as simple as the treble clef and twist and turn it, so it looks like a heart, symbolic of that deep love for music.

To show your love for music but to also stand out within a certain culture, artists have developed some incredible ways to incorporate musical symbols with other designs to create deeper associated meanings.

The Variation of Music Tattoos

One only needs to listen to the words of Shakespeare as he says that music is the food of love to understand how just about any representation will have a deep connection to the wearer.

Whether the person is a musician, a lover of music, or simply a musical connoisseur, the following gives a glimpse into all the different variations of tattoos that depict music in one form or another.

These musical tattoos are symbolic of a love of the music of the 70s and 80s. Some creative artists loop the tape from the cassette into the shape of a heart to solidify that burning love for that type music.

No symbol is more recognized for the language of music; the treble clef can be inked in many ways and still retain the overall meaning.

By flipped a treble clef and placing next to a bass clef, you create a heart-shaped design that is a clever representation of love for music.

No other symbol has more of a deep connection with music that the guitar.

Whether themed after your favorite guitarist or shown with notes coming from the chords, the guitar tattoos are both cool and a great choice to showcase your individuality.

For those who love to sing, the microphone can be symbolic of your ability to amplify your voice and tell the world what you were born to do. The microphone is also representative of self-expression and empowerment.

As you can see, music tattoos can be as varied and the people who make and play melodies. Once you fall in love with music, you want everyone to know, and body ink is a great way to scream to the world that you have love to music that will transcend time.