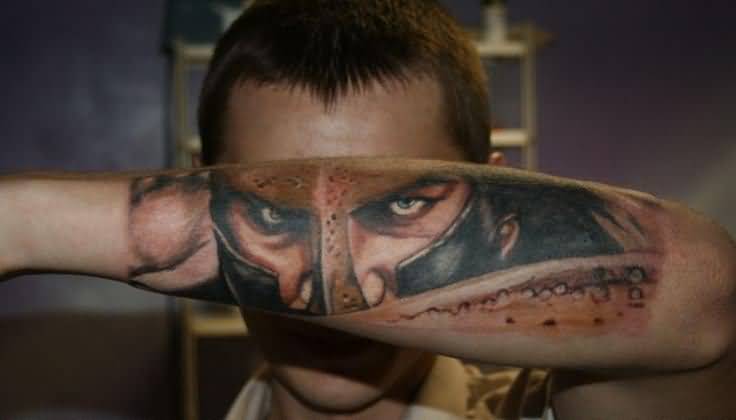 For both women and men, warrior and fighter tattoos are becoming all the rage this year. Getting inked with a warrior design portrays a degree of inner strength that appeals to the masses.

The warrior tattoo symbolizes an individual’s heritage, a reminder of goals, and a desire to focus on aspirations. For others, the warrior tattoo is representative of a willingness to fight for causes someone believes in, protecting the family, and battling without fear.

Due to the fact the warrior tattoo design has numerous meanings, it is fast becoming one of the most popular body ink styles around. For some, the tattoo can be a representation of their inner strength, power, and their cultural heritage.

For others, the warrior design may be symbolic of protection, feminism, or virility. A warrior is full of pride, masculinity, and has this incredible willingness to fight for one’s beliefs. The warrior is not afraid to take part in historic battles, and will often get stronger as he is challenged by larger foes.

With so many different meanings and variations for the warrior tattoo, it is important that you first get a good understanding of what each means before getting inked.

This way your warrior design will be unique to you and it will be in line with your core values and beliefs. Consider adding verses or weapons to the artwork to further personalize your tattoo.

Here is a detailed list in no particular order of the warrior styles available and their unique meanings:

The Celtic Warrior – One of the most popular warrior tattoo designs with people of Welsh, Scottish, and Irish descent, these tattoos feature intricate knot details on shields or helmets, or as backdrops for the warriors to stand.

These tattoos demonstrate virility and power, and a willingness to go up against any opponent or anything standing in your way.

The Tribal Warrior – Tribal warrior designs are a perennial favorite, setting your design apart from all the masses. The traditional style of tribal tattoos involves broad black strokes making up the design.

This tribal style represents a connection to family, honor, and a fearlessness to combat any opponent no matter how large. These symbolic tattoos portray strength in numbers and unwavering power.

The Ancient Warrior – The most powerful warriors lived millennia ago, they fought in huge battles using only the sparest of armor and weaponry.

These frightening warriors were part of cultures like the Greeks, Vikings, and Mongolians. This particular tattoo design can be a representation of fearlessness, primal power, and strength.

These tattoos represent having strong beliefs, demonstrate respect for feminine strength, and can be symbolic of your own feminist beliefs.

The Roman Warrior – Perhaps some of the most notable warriors the world has ever known, the Roman warriors were truly a breed apart. These amazing fighters lived by the principle strength in numbers, no matter how great their opponents.

Many of the Roman tattoos have inscriptions inked under the design written in Latin like, carpe diem, which means seize the day or Veni, Vidi, Vici, which means I came, I saw, I conquered.

Whether you choose the traditional helmet, sword, or shield, your tattoo represents unlimited power, strength, and coordination.

Hawaiian Warrior – The people and culture of Hawaii are unique in America, so getting a Hawaiian warrior tattoo is one of the best ways to demonstrate state pride. These tattoos are representative of strength and beauty of culture and are often depicted as masked warriors which intimidated their enemies.

A warrior armband using the black cross-hatching pattern is very popular today, going around your arm and continuing from arm to chest, positioned over the heart. To stay in line with traditional Hawaiian style, be sure to use black ink.

These designs depict warriors with swords drawn, usually with fresh blood on them to show how many enemies were already defeated. The Samurai is rich in tradition, fearless, confident, and strikes fear in the hearts of those who want to oppose them.

With so many varieties of the warrior tattoos, ranging from the ancient tribesmen to all those memorials for fallen comrades, these tattoos are great for either men or women.

The warrior tattoos bring a rich history of cultures from all around the globe, meaning that you could find the perfect warrior tattoo that is just right for you.