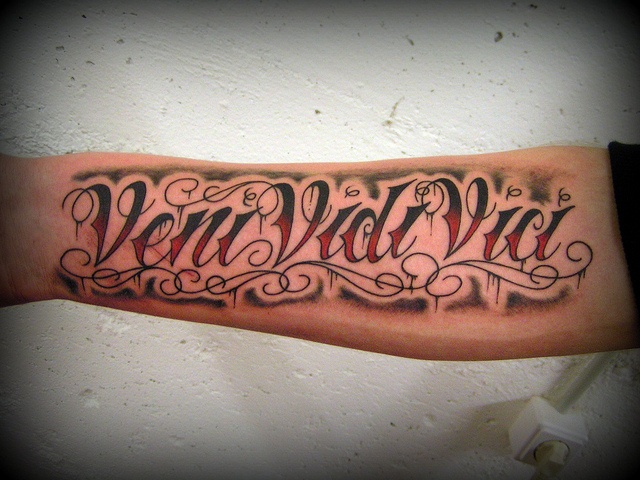 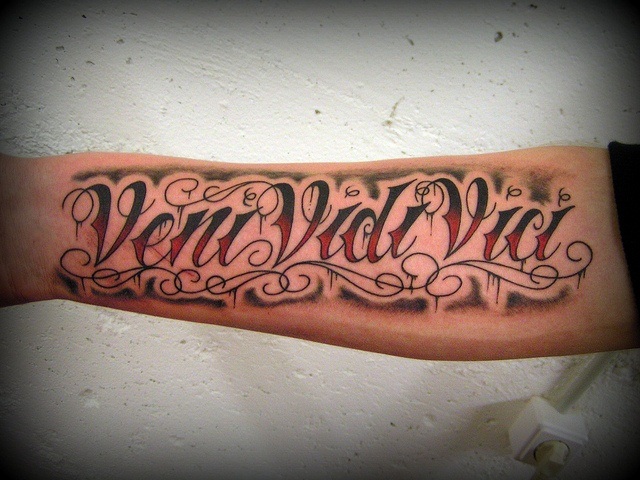 In the words of the great Julius Caesar, I came, I saw, I conquered! These words have become a popular message being used for skin art around the world.

The saying is more commonly referred to as veni vidi vici, and today means more than showing up at another country and leaving it in ruin.

Those who wonder what we are doing here, or is there more to this life, have often utilized this saying to express their feelings about being born, seeing the world, and leaving have conquered this life.

The meaning of the veni vidi vici tattoo is unique for many, but it does symbolize something that everyone can relate to.

The Meaning Behind the Words

To break down the meaning behind the veni vidi vici tattoo, first we need to carefully look at each part. The original meaning refers to coming, then seeing, and finally overcoming.

This can have a deep meaning with many people who have had to deal with insurmountable obstacles in their own life.

Dealing with an addiction, a lost love, or the pain of war, can be symbolically referenced using these words in a tattoo, similarly to a small bird tattoos.

When Julius Caesar uttered those words to the Senate, he was in fact, telling them of his historic victory and huge military prowess. Today, overcoming huge personal obstacles can be just as daunting.

Many people today are still struggling to find their own personal identify in a crowded world.

The veni vidi vici tattoo for them symbolizes having seen struggles and broke through to the other side where life is abundantly pleasurable for them.

Rather than coming, seeing, and conquering, they associate these words with evidence that no matter how large of an obstacle, they have found a way through once and they will continue to fight and do it again.

The brand of a warrior (gallery of warrior tattoos), many ex-military bear this ink to show that they have been to the gates of Hell and survived.

The veni vidi vici tattoo can tell the world about political struggles, economic pain, or a journey to a new religious path.

The unique meaning of this tattoo implies that a person has found and seen wisdom, an understanding, or a new belief that no matter the degree of difficulty, nothing will ever bring this person down.

Depending on the challenge and the amount of effort to overcome, these words can help propel someone on to great things by reminding them where they have been.

The veni vidi vici tattoo today can be a direct reference to challenges with literature, art, or even music. Many people will create a unique play on words to symbolize a struggle they are proud to have beaten.

The phrase I came, I saw, and I kicked some ass is all the rage recently and goes to show that we all have struggles that the rest of the world can never truly understand.

The tattoo today symbolizes inner strength, persistence, a deep drive, an unwillingness to surrender, and a determination to beat the odds and come out stronger on the other side. These meanings are also partly connected with tribal lion designs.