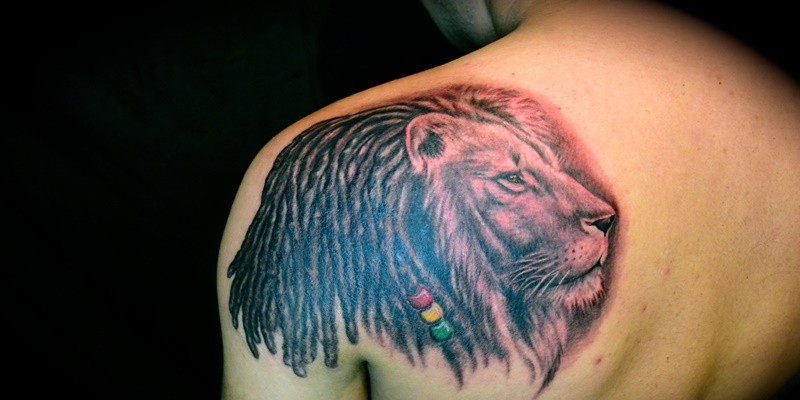 Perhaps the popularity of lion tattoos can be attributed to the fact the lion has several positive attributes that connect with those who love body ink.

When considering a cross tattoo, dragon tattoos, or the lion tattoo, many folks choose the lion because you are free to alter the design to your liking and still command the powerful meaning it is associated with.

Lion tattoos are extremely popular today, and tribal lion tattoos and colorful zodiac variations are giving this design yet another rebirth.

The Meanings of Lion Tattoos

Whether you are getting inked on your forearm, chest, or back, the larger the lion tattoo, the bigger the meaning. The emphasis of the lion in a tattoo has to do with the fact this creature is regarded as the king of the jungle for a reason.

The lion is a stealthy fighter who attacks his prey with veracity, using ambush techniques and power to overcome creatures many times his size.

This represents for some the ability to overcome bigger obstacles than themselves, to show the world they are not afraid to take on challenges, and that they will continue the fight until they have succeeded.

The lion tattoo, regardless of the size or placement, symbolizes someone who has a drive inside that can not be stopped.

What Do Tribal Lion Tattoos Represent?

Tribal tattoos are some of the more recognized designs in body ink, and incorporating the lion or lion head in these designs adds more powerful meaning to the artwork.

Placing the lion head in the center of the sun in a tribal design is basic in design but powerful in meaning. This is the ideal tattoo design for those born under the sign of Leo who wants to utilize the power of the lion and the sign of their birth in one design.

The tribal lion symbolizes courage, whether that may be moving on from a troubled relationship, dealing with the loss of a loved one, or battling a disease without fear of death.

With a tribal tattoo, thick black lines are the norm, but lately, many ink lovers have been moving towards more vibrant colors to add their unique attributes to the overall lion design.

Lion head tattoos are not only a symbol for men to show off their pride, courage, and strength, women are getting these images in their body ink designs as well.

The females appreciate the lion for more of their family attributes, hunting and bringing back a kill for the rest of the family, providing for their young, and being a ferocious fighter if anyone in the pride is threatened.

Men choose the lion head for other reasons, including its ability to never back down from a challenge, power, and strength in numbers.

Men appreciate that the lion head is symbolic of virility, pride, and potency, and often place the head of the lion on their back, chest, or shoulders, to showcase their inner drive and determination in any situation.

The Varied Lion Tattoos Through History

Lion tattoos have been inked on folks since the earliest recorded tattoos were discovered to be in use. These ancients used to ink their bodies with the symbol of the lion to represent self-confidence and royalty.

In many ancient cultures, the lion was the creation of aristocracy and law, inked on those in the position of power. Then when Asian society fell in love with inking the body, they would use the lion as a representation of power and energy.

Over the years, the techniques to get inked may have changed, but the meaning of the lion is still that of spirit, vitality, strength, victory, and glory.

Regardless if you go for the lion head or full body in your design, with tribal art, you can easily transform the design with the help of a skilled artist.

The lines and features of the lion can be completely customized to offer a one-of-a-kind design but still allow it to be instantly recognized as the lion when anyone looks.

Tribal lion art brings out the animal in such a way that can add more significant meaning to the overall tattoo design then by simply using a lion positioned in its natural habitat.