V For Vendetta Mask Tattoo: One Of The Most Powerful Revolutionary Symbols 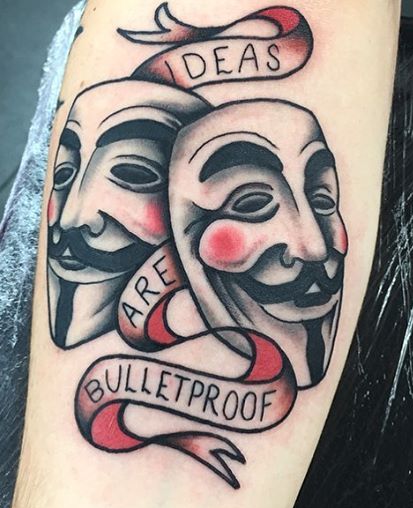 With everything that is going on with the politics in the world today people often choose to add a tattoo that has revolutionary meaning. The peace sign, the anarchy sign, the power-resistance fist and many more. There is one particular tattoo that maybe puts all of these signs together. It became a symbol of protest all around the world and is known as the Vendetta Mask (also known as anonymous mask).

The Story Behind The Vendetta Mask

It all began in London 1605 when the revolutionary Guy Fawkes had an attempt to blow up the House of Lords. The attempt happened on 5th of November and Fawkes goal was to restore a Catholic Head of State. He was arrested and executed but the people did not remember him as a villain. Today, 5th of November is dubbed as part of the British Thanksgiving. People sing songs about this event which is known as Guy Fawkes Night or Bonfire Night.

The author Alan Moore was stunningly inspired by this story and wrote a book called V for Vendetta that turned the world upside-down. Moore presented Fawkes as the greatest rough hero who above all cared for human rights. The mask that the character V wears in the book was designed by the British illustrator David Lloyd.

In 1988, DC comics were made about the V warrior that became so popular among young people. They were seriously inspired by the mask and started to make the Vendetta Mask again and use them when they make something revolutionary. It was mostly used by computer hackers whose identity can’t be know because with all the cyber security they could not be found.

The popularity explosion became so big in 2005 when the director James McTeigue made the movie V for Vendetta. Today, the mask can be seen everywhere, on walls, in stores and as a tattoo with powerful meaning.

The Meanings Of The Vendetta Mask Tattoo

Before you decide to ink the Vendetta Mask on your body, you should seriously read about Guy Fawkes and understand his story. The pale mask as it is is a very good design and looks amazing as a tattoo. There are several meanings attached to it which are strong and a perfect tattoo choice for the rebellion spirits.

For those of you who play video games, the rogue meaning can be more clear but let us explain it a little bit. A rogue character is dubbed as a thief, a Scoundrel, or a Spy who is stealth which means you can’t see it coming. If you want to research further about this meaning you can see the Rogue characters in World of Warcraft or Final Fantasy. This meaning is one of the most popular about the Vendetta Mask because today it is a very intriguing phenomenon to make non-visible good deeds.

It takes a lot of courage to stand for what you believe and to not let anyone ruin your dreams. So courage is the second meaning connected to the mask which inspires people to ink it as a sign of protest against corrupted society.

Today, the Vendetta Mask is adopted mostly by the modern-day anarchists and as mentioned before by the ‘Anonymous’ hacker group. These groups believe that the V hero lives in all of us who are striving for a better future and see him as the Freedom Warrior. We all want to change this world for the better and secure a safe world for the next generations. When asked, most people who have a Vendetta Mask tattoo say that that is the main reason why they chose it because they will always believe that society is not lost and it can be fixed.

There are tons of amazing designs from which you can choose your mask. Very often, people ink additional elements with the mask to define an even deeper meaning. The most popular design is the mask combined with the anarchy sign. There are whole sleeves with the mask in the center with the V sign above and fire around it. This tattoo is also popular among women and it is usually inked with roses around it. The rose has a significant meaning in this story because when V kills a person that corrupts the government he lives a violet rose behind. Even men ink chest tattoos with the mask in the middle and roses on the right and left side.

According to some tattoo artists, the most chosen body part for this tattoo is the arm. More precisely the back of the underarm so when you put your arm up in a fist you can see the Vendetta. It can also be a small tattoo on a finger or the ankle but the meaning is not changing. The Vendetta Mask wherever you ink it represents the revolution and is not chosen only for fashion.

Tattoos are something that we ink on our bodies to stay there permanently. The Mask is a symbol of hope for this world that is slowly falling so if you support this ideology the Vendetta Mask is the most courageous choice. Let’s look at some of the most beautiful Vendetta Mask tattoo designs.