Understanding the Meanings Behind the Dagger Tattoo 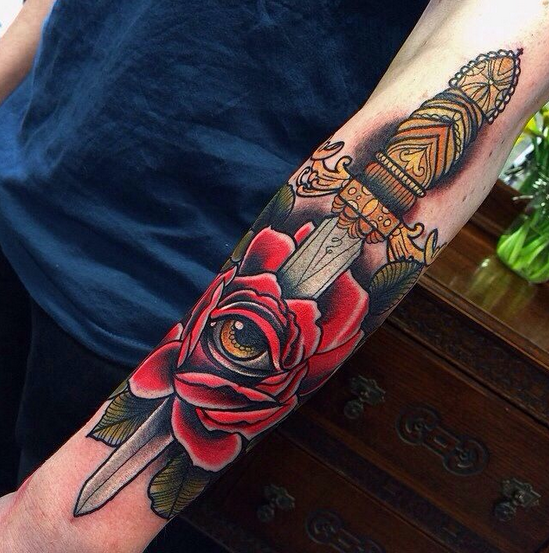 The dagger tattoo has become very popular in recent years, and for good reason. This particular tattoo design can represent everything from a devotion to the military to an expression of a sharp betrayal.

The meaning behind the tattoo can vary due to the variety of dagger designs, applications in which the dagger is being used, and the complexity of the history behind this ancient weapon.

Here are some of the popular meanings behind the dagger tattoo.

The Representation of Lost Love

One of the more popular dagger tattoo meanings has to do with losing someone very near and dear, similar to rest in peace tattoos.

When a person loses someone they love early in life, they allow the dagger tattoo to convey a steely, cold, sharp pain that remains with them for the rest of their life.

This doesn’t always mean that someone has passed, it could be that a soul mate or long-time love has cut or brutality betrayed a lover and the tattoo is a symbol of surviving but not forgetting.

This cutting away from a bad relationship allows the person to slice through that trauma and finally become liberated from all that hurt.

Dating back to ancient times, many spiritual and religious sects believed that a sacrifice was the ultimate representation of devotion.

The dagger tattoo today connects with those tribal rituals and can be deeply rooted in finding yourself in that position of having to make a serious sacrifice, just like knife tattoo meanings.

The dagger can represent a faith, purpose, or devotion that someone would literally die for.

The sharp, glistening, ornate dagger tattoo outwardly expresses a deep intensity or fire that will never be extinguished for as long as that person is alive.

The Connection to Buddhism

Dating back many centuries, the Buddhists associated the dagger with cutting all the ties to materialism.

Basically letting go of everything material and devoting a life to being spiritual can be extremely powerful, and what better symbol to represent that power than the razor-sharp dagger.

The dagger tattoo in today’s world is an expression of cutting all ties to materialism, fight against consumerism, allowing someone to break free and find true enlightenment and freedom.

The dagger represents for these people a tool that keeps them from the ties that are holding back society.

The Dagger in Today’s’ World

Today the dagger tattoo takes on a variety of meanings because of all the unique ways the dagger can be drawn, how it can being cutting different objects, and how it can depict plunging into the skin, heart, or other organs of the body.

The dagger today can represent challenges, worry, fear, and a struggle to slice through the pain.

The double-edge dagger can represent two different contrasting personalities in one whereas the world sees one side and the person lives by the other.

The dagger tattoo can be very profound, meaning just about anything that we understand it to be in our own lives.

Those who have served in the military utilize the dagger to show their love of their country, years of service, and commitment to good over evil.

Those who have been betrayed in love use the dagger as a shield while others use it to represent a driving force that can not be compromised.