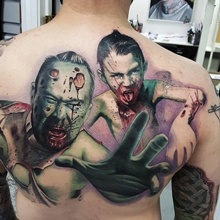 Zombie tattoos are extremely popular with fans of Gothic artwork, movies, literature, and anything related to the horror genre. Movies about zombies have been around for decades, but as special effects have advanced in recent years and these television shows about walking dead have become mainstream, zombie tattoos have become all the rage.

Whether you are a huge fan of the new genre or you are dedicated to the classics, here are some of the ways people today are creating some amazing designs with the ink.

The Zombies Through the Years

Although the zombie is extremely popular today, the attraction began decades ago when the film was still in its infancy. Actually, before the film, these creatures have been haunting the minds of humans in literature for ages.

The concept of the zombie originated in Haitian folklore, and these creatures are nothing more than a human who has died and then was reanimated. These thoughtless creatures have only one desire, to infect other humans by biting them.

Fast forward to today, zombies became popular in motion pictures and television shows, infecting other humans by way of their bodily fluids, spreading the disease and growing their group of mindless creatures.

Zombie tattoos can be designed using the human form with modification like missing body parts, blood stains, and feeding on the living.

One of the most popular ways these days to depict the zombie in body art is to take popular cultural icons and give them a complete makeover.

For those who hate the popularity of the Hello Kitty phase, turning those adorable cartoon cats into bloodthirsty zombies is all the rage with the females these days. Others who want to make a more profound statement go for the true cultural icons of the last century and turn them into ghoulish monsters.

Some of the most popular zombie tattoos with famous people as the undead are Elvis Presley, Marilyn Monroe, or even the Pope. It seems that the more famous, loving, and good the character, the more shocking when you see them as a zombie.

The Battle Against Zombies

Although there is a great deal of appeal in anything zombie these days, there are some who look at it from the other side of the coin. These are some who prefer to battle those walking killers instead of embracing them.

The reason these zombie tattoos are growing in popularity is because the amount of blood and guts you can draw really adds to the overall appeal of the design.

Having a shotgun barrel in the face of a zombie and blowing it to pieces in the design is both shocking and compelling. While the zombies are trying to spread the disease around the world and take over the human race, it seems like some brave souls have taken matters into their own hands and are taking down the zombies one at a time.

These zombie tattoos run the full spectrum of meanings, from fear, terror, horror, and everything nightmares are made of, to strength, dominance, power, and righteousness.