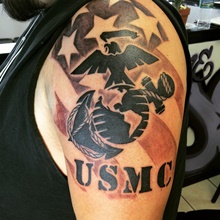 The USMC tattoos are designed for one and one purpose only, to represent the United States Marine Corps. This is also one of the few tattoos that do have some regulations as far as application with those in the military. Marine soldiers must have papers that show they will abide by certain rules before getting inked.

That being said, even civilians can get this powerful and patriotic tattoos for a number of reasons because they represent their country, their pride, and even their love of a fellow Marine.

Not only are the USMC tattoos a sign of one’s patriotism, they have been utilized over the years since the days when the French soldiers returned from the South Pacific wearing unique tattoos.

Although the French stopped the practice because of fears of medical complications, American soldiers were drawn to the appeal of tattoos, and the tradition spread like wildfire. US soldiers, especially Marines, would get their troop symbols inked to represent their pride in their group and the marines in general.

Those on the battlefields would get inked before battle to show their enemies they were not afraid to die for their country.

The Meaning of the USMC Tattoo

While common with men, it isn’t out of the realm for women in the Marines to get this design inked on their bodies. The design of the USMC tattoos is varied, but they all tend to have some of these main components. Usually within the design are the letters USMC, the globe, an eagle, and anchor, a bulldog, and dog tags.

The eagle represents America, the globe represents the presence of Marines fighting and fallen around the world, and the anchor is symbolic of the Naval history associated with the USMC or how the Marines are stretched from coast to coast.

Combining these symbols together represents a commitment to the country, courage, pride, family, respect, heritage, dedication, faithfulness, and success.

Within the USMC tattoo concepts are symbols that can enhance the meaning for the wearer. The most common symbol is the bulldog. This symbol is considered to be symbolic of the strongest and bravest soldiers in their operations.

The dog tags are increasingly popular because they can represent a fallen brother or all the fallen Marines that have sacrificed for the country. For others, draping the dog tags over the heart is representative of the protection of the Marines by God while fighting in the fields.

At the core of these tattoos are values of fidelity and faithfulness, a bond unlike any other in the world throughout the military.

Whether representing time served in the military, a fallen soldier, or the love for all Marines, these are some of the most powerful tattoo designs that stand for strength, dominance, and an unwavering love for this country at the deepest level.