Have you heard of the clothing brand Ed Hardy? It is a popular brand (people are often seen wearing his shirts) that has intricate designs all over the products.

Here is your fun fact for the day: many individuals do not know this, but Ed Hardy the brand is actually Don Ed Hardy, a famous tattoo artist!

His beautiful tattoo artistry was brought into the glamorous world of fashion. He is easily one of the most influential tattoo designers, and his work has successfully stood the test of time in the tattoo and fashion world.

You will also recognize his ink as a Japanese art form, with many of his designs appearing foreign yet artistically beautiful.

If you are a fan of his art, or you are looking for new ideas for an interesting tattoo, we have everything you need to know.

Discover who he is, his accomplishments, what he is known for, and how you can get some of his art on you:

Who He Is: A Legend Between Tattoo Artists

Don Ed Hardy is a world-famous tattoo artist known for the best tattoo designs in addition to being the genius behind the fashion brand.

He is one of the most desired and influential designers in the world. His art is recognized as one of the most successful incorporations of Japanese art in both tattoo and fashion industries. 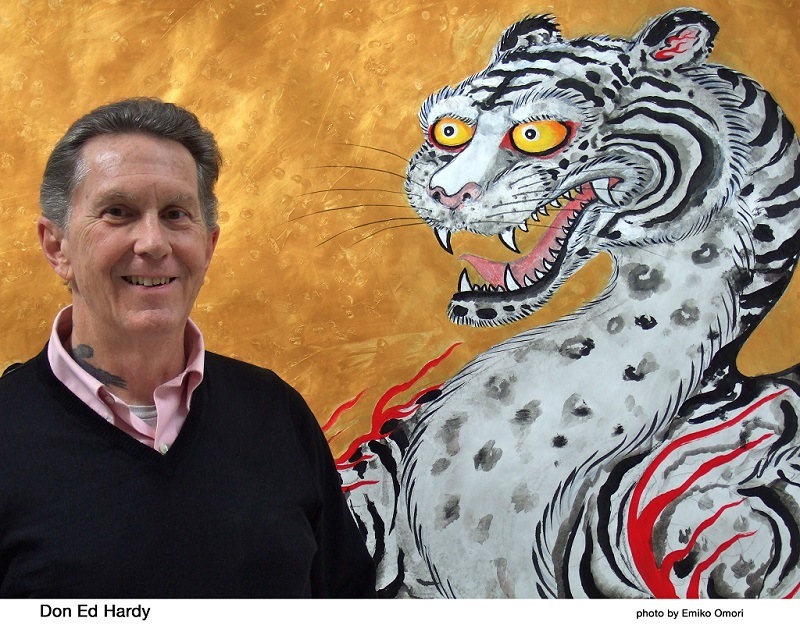 He is often only known as “Ed Hardy” his fashion brand.

Before he broke into the fashion world, however, he became a successful and well-known tattoo artist.

Raised in Southern California, Ed Hardy started off his career with painting and printmaking before he ended up in the tattoo and fashion industries.

His art is recognized all over the world, and he continues to be one of the most influential designers today.

Don Ed Hardy started the road to success by enrolling at the San Francisco Art Institute. He went on to graduate with a B.F.A degree in printmaking and continued his career with painting and printmaking.

Before he entered the tattoo and fashion industry, he was working in the media and printmaking business. At the time, his art was being displayed in many art galleries and museums internationally.

Then Ed Hardy drew his attention into being a tattoo artist in the 1960s when he left to Japan to study tattooing on a Yale arts fellowship.

He brought his inspiration back to San Francisco, where he opened up his tattoo shop that he still owns today.

In the year 2002, he decided to take his art to the fashion industry and licensed his designs to be made into a clothing line.

From the early stages of his career, Don Ed Hardy was already receiving awards and making huge achievements. In 2000 he received an honorary doctorate from SFAI. In addition, he has written and published thirty books.

This is all on top of all his designs and art making. Over his career, he has curated numerous exhibitions for art galleries and nonprofit spaces.

His work and story have appeared in many periodicals and films all over the world. In the year 2000, he was appointed by the Oakland Mayor, to the city’s Cultural Arts Commission.

Don Ed Hardy’s most famous work started off as his original tattoo designs.

His wall of tattoo art was covered in his own designs that customers could choose from. His most famous design of all time is his skull.

All of his skull designs have a heart with a ribbon and a saying about love. Another famous design features his famous roses.

His work is so unique and has a very distinct personality that boldly stands out as Hardy’s handiwork. Once his designs hit the fashion industry, they were mixed with bedazzled gems, becoming a huge new fashion trend.

His most popular fashion lines were his shirts, shoes, and cologne, all featuring his distinct skull and rose designs.

How Can You Find Don Ed Hardy?

The legend among tattoo artists is that you can never get a true Ed Hardy tattoo, which would have to be done by the hands of the artist himself.

Today he is busy traveling to and from Honolulu and San Francisco and managing his tattoo shops and his clothing line.

However, you can find his designs almost anywhere online. If you want one done by one of his talented artists from one of his two famous shops, you’re welcome to travel to Honolulu or San Francisco!

If you wish to try his signature designs yourself, you will need a top-rated tattoo starter kit, and research black tattoo inks reviewed.