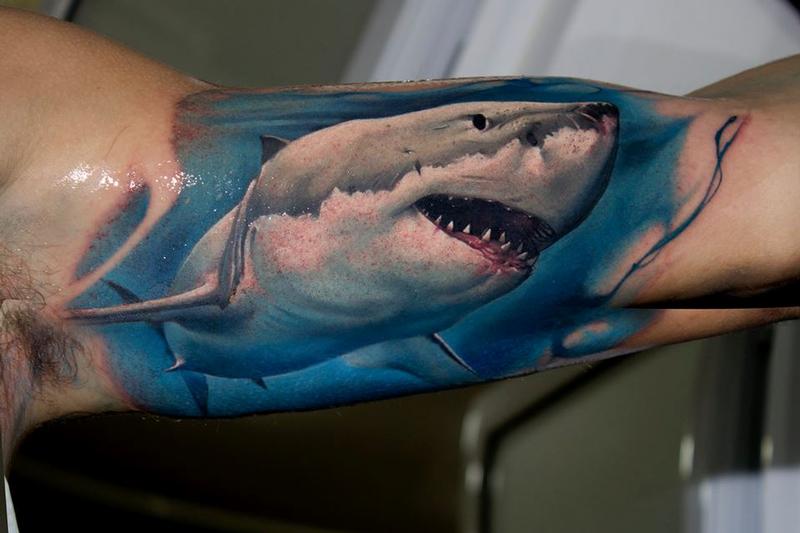 Nothing strikes fear in the hearts of those out on the sea like the shark. Frightening and fascinating, the shark is symbolic of dominance and power, and today haunts the dreams and nightmares of anyone thinking about going anywhere near the open seas.

One only needs to hear a few bars of the Jaws theme song to go running for the nearest lifeguard, and surprising the shark tattoo has the same effect on most people. If you are looking to showcase your common traits with the shark or trying to send a message to those around you, the shark tattoo is a great way to get your point across.

The History of the Shark

Many sailors and old sea dogs who have spent a considerable amount of time out on the seas continue to take part in a very long tradition of inking their bodies with the image of the shark or anchor. The reason these sailors get body ink depicting the shark is not to scare other sailors, but to try and appease the gods and provide them safe harbor while out on the rough waters.

Many voyages across the oceans are quite dangerous indeed, and the image of the shark tattoo is utilized to show these men have no fear of death or dying. According to Hawaiian legend, the shark is an ancient god and by engaging them in certain rituals, their relatives are transformed into powerful beings upon their death.

Known as the Aumakua, these protectors of the sea will take care of their descendants long after they have left this earth.

Many of the ancient civilizations needed to travel by sea in order to explore, trade, and expand their culture. In many of these indigenous cultures, the share is representative of a spiritual bridge between the sea and the land.

Dakuwanga is the shark god of Fiji, and he is said to protect the fisherman who is out at sea by devouring lost souls. Hawaiian and Australian societies talk about how native folklore spoke of shape-shifting sharks that can freely roam anywhere they like.

These sharks are representative of an aggressive lust for life, always in a constant state of motion, never taking a second to sleep. These attributes appeal to many who make use of the shark tattoo in their body art.

The shark used in tattoos today can mean more than simply an aggressive force or a fearlessness to pursue anything in life. Today, the shark in a tattoo can represent a go hard or go home attitude, these people live their lives to the fullest and are always moving full-speed ahead.

When it comes to achieving their goals, the shark tattoo represents taking no prisoners in a quest to get the prize at all costs. The shark is passionate in their pursuits, and this is something that appeals to the masses.

People who run their own business or have climbed to the top of the ladder in any industry must have a shark persona, to eat up and spit out the weak and dominate in their world. These cold and calculating killers are not consumed by emotion, they have a job to do and they are focused on getting things done.

While seeing a shark will strike fear into the hearts of even the most seaworthy captains, it is important to note that today the shark tattoo is representative of many unique meanings. A person who is drawn to the shark tattoo could have incredible fearlessness, primal strength and power, unmatched intelligence, and a wild curiosity.

The person who connects with the shark is aggressive, has a clear vision, and unmatched insight. The shark is a powerful presence, regardless how big or small the design, they are always on the hunt, and they are equipped for the fight.

Here are a few of the most popular shark tattoo designs you can choose from:

In other cultures, if you see a hammerhead shark in the waters, it symbolizes that the gods are watching over you, and those born under the sign of this shark are considered to be natural warriors. Those who get the hammerhead shark tattoo are thought to be guardians, protectors, and those willing to go to any lengths to keep their inner circle safe.

By far the most popular of all shark tattoos, the Great White is a formidable force that has zero known natural enemies in the seas. They are at the top of the food chain, and every creature is susceptible to their power. These powerful predators work in the shadows and attack at break-neck speed, often surprising their victims with their speed and accuracy.

Those who prefer the Great White shark tattoo are thought to be aggressive, clever, imposing, and efficient. This particular tattoo can be made even more foreboding by having the mouth of the shark open, teeth exposed, victims blood throughout.

There are many people who choose to have themselves inked with cartoon sharks rather than go with those powerful and haunting images of real killers of the deep. These cartoon sharks get their inspiration from such characters as Street Sharks, Jabber Jaw, Shark Take, and Lenny the Shark.

Transforming these terrifying creatures into cute and playful characters still has a unique symbolic meaning for many. These cartoon sharks tell the world this person does have a playful side but don’t get fooled by their playful nature because right below the surface lies a deadly shark persona in disguise.

When it comes to the shark tattoo, this is really a case of the image and the design being a true reflection of the wearer. These tattoo designs have a spiritual connection with different tribes, they identify unique native cultures with the seas, and they are perfect for those who have this bond with nature and water.

The shark is the ruler of the seas, and people who gravitate towards this specific design tend to possess traits that are aggressive, bold, fearless, and dominant.