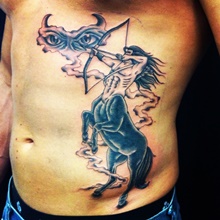 The symbolism associated with the Sagittarius tattoos dates back to the Greeks and Arabs, while no one is quite sure who actually was first. The symbol of the archer even has roots with native Americans who would draw these images on cave walls. The Zodiac sign Sagittarius is the ninth sign on the wheel and among three fire signs.

The Sagittarius tattoos mostly usually by an archer who is half horse half man, pulling back on his bow and an arrow. This sign represents those born between November the 23rd and December the 21st.

Getting the Sagittarius tattoo represents pride, fury, passion, fury, independence, and courage. Usually, someone getting this particular type tattoo has several personalities.

Dual Personalities in One

One reason that people born under this sign love to get inked with the Sagittarius tattoos is because they represent the union of two completely different people. Just like how the tattoo depicts part human and part horse, this can be a person who has conflicting personalities within.

On the surface this could be a person who is rough and fierce, while under the surface they are kind, compassionate, giving, and loving.

It also means this person could be caring and loving on the exterior, but they are not one to be pushed around because deep down they are a fighter, and they will not take it lightly if you abuse their trust, friendship, or kindness.

The Fighter to the End

The most endearing part of the Sagittarius tattoos for many is the archer in a position to strike. The bow and arrow are symbolic of a person that will face any challenge without fear.

The wearers of this tattoos think that they will come out victorious regardless the challenge. This can represent a person who was battling an addiction that they have decided to break free from.

It can be symbolic of a person who has become tired of dealing with an abusive relationship and has moved on. It can also represent someone who is willing to take on great challenges in their life and determined to come out on top in the end.

In most cases, the Sagittarius tattoos feature a half human-half horse. Creative wearers can make the human half of the design many things, from a male, female, to cartoon characters. Regardless the type of representation for the human side of the design, it is symbolic with achieving a much bigger purpose in life.

When we take a closer look at the horse half of the tattoo, is represents the spirit of this animal and that desire for adventure. This means that the wearer loves to help others, craves traveling, and having an adventurous life.

Some prefer to have the image drawn alone, while others depict the arrow piercing the enemy. The arrow can be in the bow, flying through the air, or stuck in the heart of those on the other end of the attack. For those born under this sign, the Sagittarius tattoos are a way to express their personalities to the world.