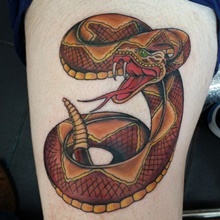 The snake of any variety strikes fear in the heart of men, but none more so that the rattlesnake.

This snake is so confident in its killing ability, it will actually sound the warning with its rattle to larger prey to either turn and leave or be prepared for the fight to the death.

The rattlesnake has been revered and worships for centuries with many ancient civilizations, and today it is one of the most powerful tattoo designs to get.

Here is a brief history and look into the meanings of the rattlesnake tattoos.

The rattlesnake has a deep connection with people from ancient Chinese, Native American, and African tribes.

The snake is associated with water, and this water is connected to healing, purifying, and cleansing.

According to Greek mythology, this snake was said to offer regenerative powers, offering those lucky enough to come in contact with the snake a sense of renewal.

This mythology was founded on the fact that the snake will eventually shed its skin and grow bigger and stronger as a result.

After each shedding, the snake is shiny and new, ready to take on new challenges.

The snake for many ancient civilizations represented balance, the joining of opposing elements, and duality. The snake was often used for unification and further enlightenment.

The Power of the Rattlesnake

The reason this particular snake is such a popular subject for tattoos is because of the many diverse meanings associated with this stealthy predator.

This snake can certainly handle itself in the wild, small prey is no match for when the snake is in attack mode.

Larger prey has better be on their game because the snake when backed into a corner, will take on attacks from those many times its size.

The rattlesnake will sound the warning if threatened, and if it strikes, injects a venom that will take down a human being in minutes.

For these reasons, the snake was associated with being a guardian of ancient burial sites, a protector, and defender who had few rivals.

For these reasons, the snake was representative of rebirth, resurrection, and extreme power.

The rattlesnake tattoos today are symbolic of a whole host of meanings. For some, the shedding of the skin can symbolize the moving on from an abusive relationship, troubled past, or serious addiction.

The rattlesnake tattoos are also symbolic of the protector, someone who you do not want to mess around with, someone who will protect their loved ones to the death, and a person who has no fear bout standing up for what they believe.

This amazing snake is representative of transition, defense, mystery, being grounded, fertility, birth, and magic.

The snake can be drawn attacking prey, or coiled in a defensive position ready to strike down on anyone who gets too close.

The rattlesnake tattoos are extremely popular right now because they can be drawn with amazing details  and colors (like white tattoo ink) that make the snake appear to pop right off the surface of the skin.

These are tattoos for those who are not afraid to defend their space, their family, and their privacy.