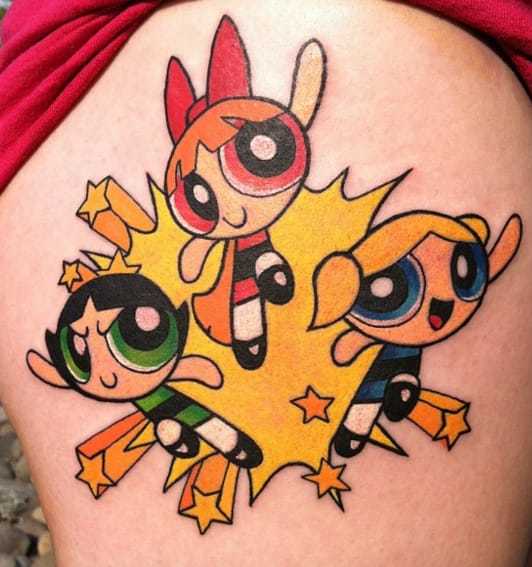 One of the most popular cartoon series on Cartoon Network that we all love is the POWERPUFF GIRLS! Those adorable three little superheroes that professor Utonium created are icons to girls everywhere because of their magical powers. Created from “sugar, spice, and everything nice”, the attempt was to create the perfect little girls but then Chemical X accidentally fall into the experiment and they become extraordinary.

Girls always connect with one of these cutties and there are amazing tattoos that show their powers and the person’s personality that wears them.

Bubbles ingredient was sugar so she is the most emotional of all with a big pure heart. She is dubbed as the cutest because of her’s characteristics but doesn’t let this full you because she can become very angry when t comes to protecting her sisters. Bubbles love animals and her closest friend and the favorite toy is Octi, the purple octopus that she drags around with her everywhere.

Sometimes, girls connect Bubbles with the astrological sign of Cancer and choose this tattoo because the character reminds them of their personality. Other girls connect with Bubbles on her look because she has blond hair and big blue eyes. Also, she is a master in computers, video games, and sound manipulations which are defined as her abilities as a superhero. She can create strong energy filed which protects all the animals during their fights with the one and only Mojo Jojo.

Created from everything nice, Blossom is the team leader and she is dubbed as the smartest one. She is always planning the strategies on how to attack the villains and never makes a mistake. Professor Uotnium named her Blossom because of her strong and independent character. This is why she wears a bow that is connected with girls who tight up every situation in life perfectly. Besides other meanings, the bow is a symbol of intelligent and creative girls. Her abilities are intuition, ice breath, genius capabilities, and microscopic vision.

Blossom is a symbol of strong self-confidence and can be stubborn sometimes, but she also has a pure heart and that stubbornness doesn’t last long when Bubbles begin to cry! She is always trying to talk to the villains reasoning them to not make childish things but that always ends in a fight because you can’t reason with Mojo Jojo. If you find yourself in Blossom’s characteristics there are thousand amazing designs from which you can choose your tattoo or create a design yourself that describes you the best.

Created from spice, Buttercup is the strongest when it comes to fighting their enemies. Besides Blossom who plans everything, Buttercup is ACTION! She gets the job done and is dubbed as a Tomboy. Defined as the strongest of them all, she is fear. When the villains see her angry they are stepping out of her way. Like her two sisters, Buttercup has a kind heart too, but that can be filled with rage all of a sudden if she notices injustice. One of her characteristics is disgust which is why she wears the color green and rejects everything too girly. This is why she always fights with Bubbles.

Buttercup has black hair and big green eyes and she is the underground punk-rock type of a girl. She watches a lot of TV and she is messy. She is a true superhero and doesn’t possess a lot of abilities, but she is the toughest of them all. Today, Buttercup is the most common choice for a tattoo because girls connect with her characteristics. Living in a fast time, everything is action and there is no time for a lot of thinking. The popcorns and sweets are the best way to calm yourself down in front of the TV after a long day of work.

Of course, there is one character that can be an awesome tattoo choice for the boys. The archenemy and the greatest villain Mojo Jojo is the main antagonist in the cartoon. He is a monkey with a big brain, some kind of experiment that has superpowers also. Like most villains, Mojo Jojo is trying to take over the world and the Powerpuff girls always stop him. The character design itself is the main reason for a tattoo. It looks great because of the simplicity of the 2D concept. There are variations of these characters when it comes to tattoos and you can design him in any style you want. The same goes for the Powerpuff Girls.

HIM, is another villain in the Powerpuff girls series that is in a team with Mojo Jojo and it is the most popular character for a tattoo. His appearance is very weird and undefined which makes it mysterious and even funny. HIM has a devilish red skin, crab hands, and high black boots which makes “HIM” look like “HER”. He is defined as the Kind of Darkness and is the second most terrifying villain of the girls.

However, each one of the Powerpuff Girls is unique in their own way and you can easily recognize yourself in one of them because they have precise differences. They are so adorable so you will definitely not make a mistake to ink them as tattoos.

You can add all three of the characters if you are a huge fan of the cartoon or pick your favorite and ink it on your body. Most of the time, the characters are inked in action, punching, flying, with mean eyes but sometimes, their pure heart is the choice so they have the cutest expressions. Bubbles can be designed with bubbles or a lot of animals, Blossom can be designed with flowers and ribbons in red, Buttercup is mostly designed with a guitar or a mean face and she is always in action.

Choose a body part that is the most visible. The Powerpuffs are part of those tattoos that you want to show to the world. Because of their popularity, you can add one on your arm or leg in an amazing design that catches the eye of the viewer. You can choose to ink one or all three in their full body or just the heads. Some girls have the three girls tattooed on their three middle fingers and that looks awesome! Other examples can be seen on someone’s neck or back or the chests.

There are also tattoos with only the Chemical X and around it there are bubbles, ribbons, and guitars or something similar to this that describes the girls. It is really a choice of your own for the concept because there are a lot of variations where these tattoos can look the best. It is the same with Mojo Jojo and HIM, you can choose your favorite design and body part for your villain tattoo.

Let us see some designs from the Powerpuff Girls cartoon: