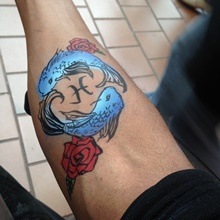 Those born between February 20 thru March 20 are considered to fall in the Zodiac sign Pisces, otherwise known as “The Fish”. This sign is often depicted as two fish, one swimming in the opposite direction of the other. Those born under this Zodiac sign are ruled by the planet Neptune and are considered to be quite sensitive, imaginative, compassionate and kind.

Just below the surface, however, the Pisces can be too idealistic, secretive and vague.

The History of the Pisces

People that are born under the sign of the Pisces are considered to be the do-gooders and dreamers of the Zodiac. These folks have always been considered the most caring people, and appreciate everything nature has to offer. While they do possess an aura of mystery, it is due in part to their dual personalities.

The symbol for Pisces, the two fish drawn in opposite directions, is representative of a person with conflicting beliefs, someone who can be soft on the outside but tough inside, and one who is easily persuaded to go from one idea to another.

Their artistic nature certainly comes to the surface in the way they design their own Pisces tattoos.

Make no mistake about it, you will instantly recognize the Pisces tattoos when you see them. Two fish swimming in the opposite direction can be drawn a number of unique ways, from a simple outline of the fish to a more detailed drawing of the fish with eyes, scales, and gills.

When drawn facing the opposite direction, the meaning can be symbolic of swimming against the current each day, having trouble deciding which direction one should travel, or outside forces pulling this person in two directions at the same time.

Some incorporate the Yin-Yang to symbolize the light and dark forces within working together. Others associate their fish with their religious connection to Christianity.

Although the Pisces tattoos can vary from the two fish to the glyph, most prefer the glyph because it can be enhanced to really make the design stand out. To get an idea of the Pisces glyph, picture a set of parenthesis facing outward from each other, connected by a single thin line in the middle.

This symbol can be inked just below the sea level, surrounded by aquatic plants, or with the word Pisces drawn underneath. Since Pisces are considered to be ruled by the twelfth house, many play on the fact this house of the subconscious can be depicted in tattoo designs as dreams and hidden desires.

One way to enhance the appearance of the tattoo design is adding in the birthstone, the aquamarine, to the imagery. The combination of the gemstone, the fish, and sea green colors, make this tattoo design one of the most appealing on the eyes.

These Pisces tattoos are symbolic of a person who is caring, loving, has a wild and colorful imagination, cares about others, and certainly has an unwavering love of nature. These are the folks who are determined to save the Earth, one Pisces at a time if need be.