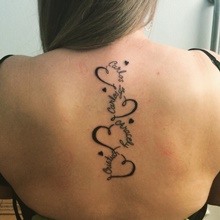 Name tattoos have seen a recent explosion in popularity as people are trying to create body ink designs that separate them from the rest of the pack.

These name tattoos have been around for as long as tattooing has, and whether getting branded for your tribe or getting inked to commemorate a loved one who has passed, the creativity and freedom of expression of name tattoos is something that will transcend the ages.

Those who want to get inked with the name of someone who has a unique connection with them will have no trouble designing a concept that will look amazing and give the wearer the ability to solidify that bond in their way.

The History of the Name Tattoos

Tattoos in ancient times were used to display position in a tribe or to show allegiance towards a group. At the turn of the last century, these name tattoos became popular with the military, either expressing their love for the branch they served, their parents, spouse, or children.

As the century progressed, many people would use the rest in peace tattoos to commemorate the passing of someone they held near.

The Popularity of the Names Tattoos

While the rest in peace tattoos and mom and dad tattoos have climbed to the top in popularity as far as names tattoos go, the reason for the new interest has to do with the fact you can alter and enhance these designs easily as time passes.

Perhaps you wanted to get the name tattoo of a family member who has passed. Today you choose a fancy script font and place the design somewhere it will be seen, so it gives you a pleasant reminder each day.

Now a year or two from now, you remember that a feather, a rose, a certain bird reminds you of this person every day. Now you get the tattoo updated around the name, to enhance the meaning and association.

The meanings of the name tattoos are as diverse as the design itself, that is part of the reason these tattoos have become so common at the tattoo parlor.

Some parents get the kid’s name tattoos each time they have a new addition to the family. Placing the exact imprint of the baby foot under the name is a great way to personalize the design.

Then some choose to go the religious route, placing a deceased family member in a cross, grave market, or soaring with Jesus in the heavens.

Others like to put the name of a lover, spouse, or partner in ink, although these tend to be the ones that will eventually get covered up at a later time when the relationship sours.

The Diversity in Name Tattoo Designs

Part of the allure of the name tattoos is the fact you can do just about anything with a name. A name can be incorporated into an object associated with that name.

A name can be part of a verse or song that connects the two together. Name tattoos can be placed on just about any part of the body, in any size, with various adornments.

The name tattoos are a permanent reminder of someone who has a special connection to this person for life, so they tend to be unique in design, and despite two people having the same name, the designs are rarely similar.

Perhaps the most popular name tattoo is parents getting one of their children. This is a forever bond, and whether the child is remembering the parents or the parents displaying their love for the new addition to the family, diversity is part of the draw in the design.

The name tattoos allow anyone to create a design that has a significant meaning to them, something they can touch and connect with, and give them a sense of individuality. The name in the design means something different to everyone, even if the family get one as a group.

That connection to a mother means different things to a son, daughter, husband, parent, and that is why these name tattoos will continue to grow in popularity for many years to come.