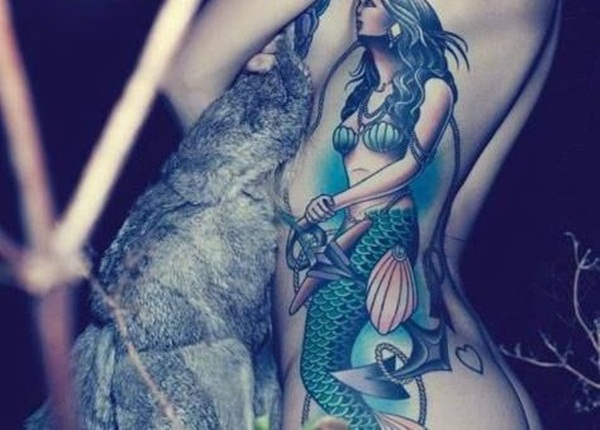 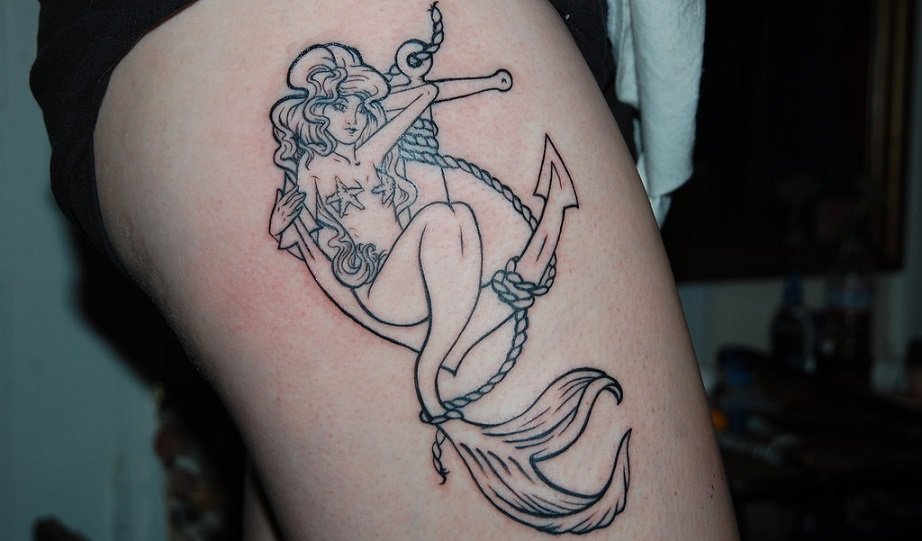 The mermaid has long been depicted as a beauty of the sea that has a heart-stopping beautiful voice. In fact, anyone who could hear the luscious voice of the mermaid was to become helpless from her charms.

The mermaid is symbolic of the matron of enchantment, seducing travelers of the sea with their grace, beauty, and hypnotic melodies.

The mermaid has the ability to persuade even the most hard-core sailor to succumb to her wishes, and today many people can relate to her beauty and charm in the way they depict the mermaid on a tattoo.

The History of the Mermaid

One of the earliest tattoo designs for those who lived on the sea, the mermaid tattoo meaning has always had some basis in allowing passion and the heart to overall common sense. Having been long associated with the love goddess herself, Aphrodite, many travelers of the sea compare the mermaid with Tethys, Amphitrites, Calypso, and Ran, the Norse sea goddess.

These persuasive spirits of the seas have been blamed for causing sailors to drift off course and wreck their ships, mostly due to their sexually tantalizing powers.

Although the mermaid is attractive to look upon, her wild spirit and rebellious independence simply can never be contained, a quality that has mass appeal for people who adore skin art.

The Mermaid Through the Years

The design of the mermaid has changed over the years, as many sailors would incorporate her holding combs made of fish bones. These bones represent an ancient nautical symbol for power over all nature, and these ancient sailors believed those fish bones could allow the mermaid to control the storms of the seas.

If a mermaid is depicted holding a mirror, this represents a connection to the moon or her reflective nature and self-admiration. Although the mermaid is elusive and hardly ever seen, that scarcity simply means she only appears to those men who are true of heart.

The mermaid appears at magical times, either dusk or dawn, which could represent her perfect timing to be able to create magic in the lives of those who gaze upon her.

Today many people simply love the mermaid for a tattoo design due to her feminine pin-up qualities. The mermaid is all about love, beauty, and mystery. She is elusive, private, and extremely sensual.

Whether men are getting the mermaid tattoos because they love these sexual qualities in woman, or women are getting them because she represents many of the attributes of the mermaid, the meanings are both as vast and deep as the mystery surrounding this elusive sea beauty.

The wild spirit of the mermaid can not be contained by anyone, and this appeals to a wide audience. The mermaid is perceptive, persuasive, and has an untamed heart.

With such a broad spectrum of associations, the mermaid tattoo meaning is a personal and deep reflection of the person who decides to have this sea creature permanently inked to their body.

Whether it is an attribute you desire or currently possess, it is crystal clear why the mermaid tattoos have such a global appeal.