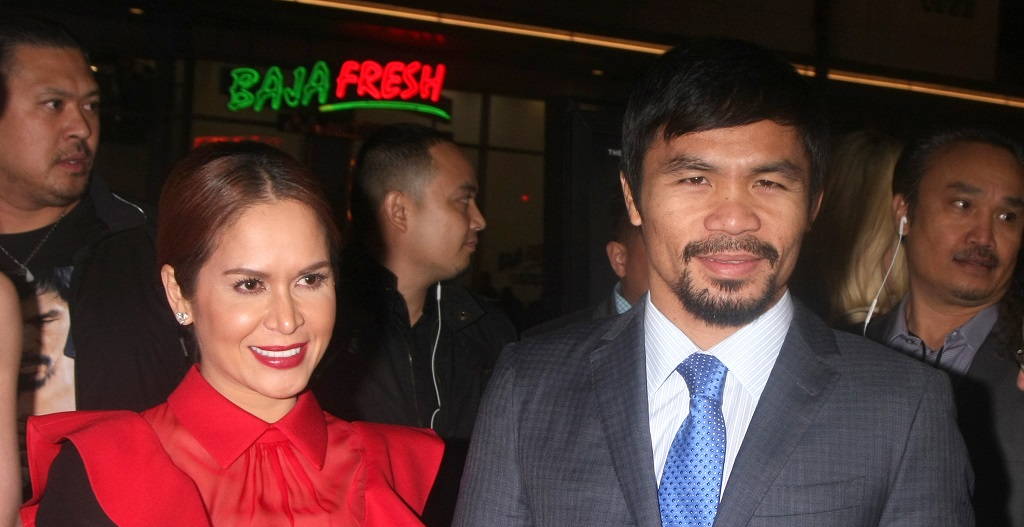 For those who don’t watch professional boxing, you may not be familiar with Manny Pacquiao. He is ultimately known for his successful boxing career, and he is also well-known in the tattoo community for having beautiful tattoo art on his body.

Believe it or not, Pacquiao is also a politician, serving as the Senator of the Philippines. His boxing career is one of the most memorable and famous careers of all time.

Why is he known in the world of famous tattooed people? His tattoos are extremely popular for being design inspiration for other individuals such as angel tattoos for men, cross tattoos, name tattoo designs and ideas, and his meaningful family tree tattoos.

Learn more about his career, his tattoos, and their meanings, and where he is today:

Many Pacquiao Record and Career

Manny Pacquiao is one of the most well-known professional boxers in the world. His career started out very early on in his life, when he was just a young teenager he left his family to board a ship to Manila.

He had hopes to train as a boxer and launching a career out of it. His dream came true almost immediately; in 1995 his goals gained large amounts of traction.

At the age of 16, he stepped into a ring for his very first professional bout. Pacquiao clutched his first ever professional win, and his victory propelled him into a long and successful boxing run that would potentially encompass two decades.

In the year 2016, Manny was ranked number 2 on the ESPN’s list of top pound-for-pound boxers within the past 25 years. 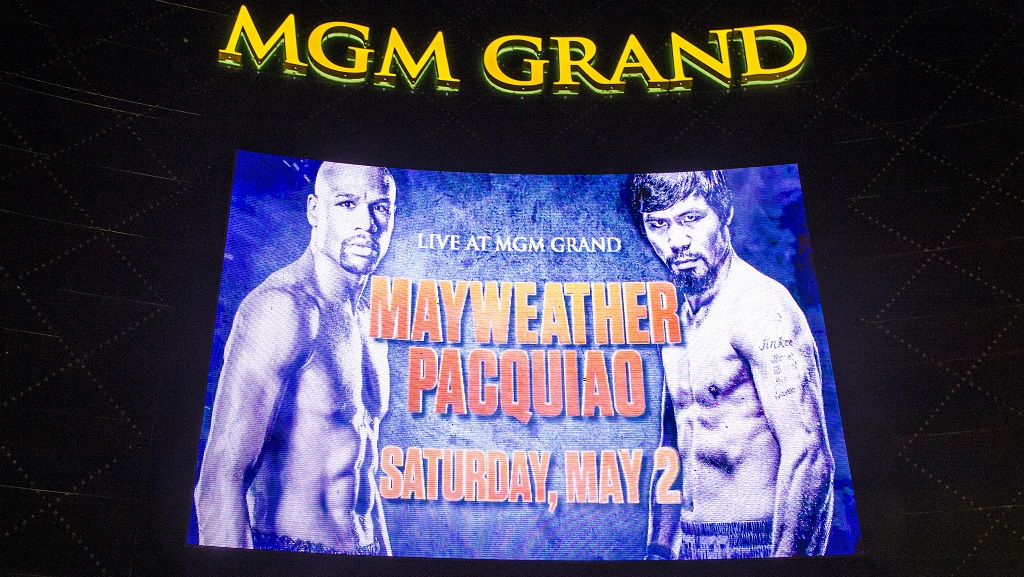 His impressive career started out with his win against Chatchai Sasakul of Thailand, clutching the World Boxing Council Flyweight title.

He then moved into a higher division for weight and scored a technical knockout of Lehlo Ledwaba in the sixth round in 2001, grabbing the International Boxing Federation Junior Featherweight title.

For many years after that, he went on to win many other high-profile fights claiming more world titles in a total of 8 different weight divisions.

His Famous Tattoos and Their Meanings

Manny Pacquiao’s tattoos are considered “Jailhouse Ink”, and why exactly? Not because he actually got them in jail, so don’t get your underwear in a knot.

His art is noticed for its sketchy workmanship, and traditional motifs that are usually seen in prison tattoos. Some might say its poor workmanship, but that can explain by the fact Manny actually did some his tattoos himself when he was 13 years old. 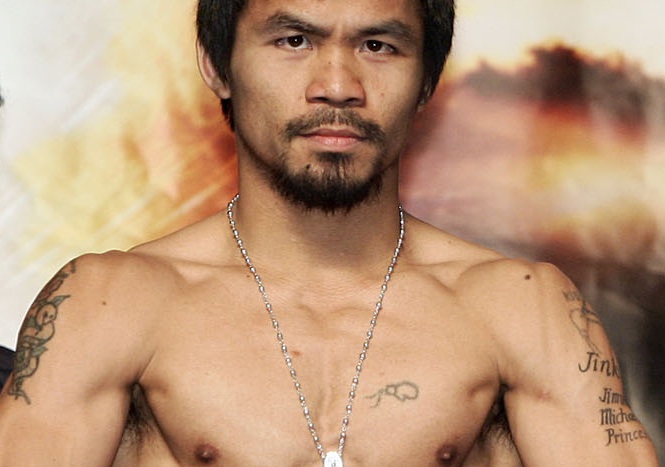 You can’t beat that. His most recognized tattoos are his family’s names in a list down his left shoulder, a hand with a boxing glove just above that, another boxing glove on his peck, a meteor tattoo, and on his forearm and are famous rose with a serpent around the stem on his opposite shoulder.

His family tattoos are extremely important to him as they represent his love for his family members and the importance of family.

His boxing glove tattoos were his original tattoos that he performed on himself as a young teenager to signify his love for his sport, boxing.

Where Is Manny Pacquiao Today – No Many Pacquiao Retirement in Sight!

Manny Pacquiao is still a boxing champion today and is not yet retired. In fact, he had a recent fight against the undefeated Jeff Horn coming out with an impeccable fight and going home with about 10 million dollars. 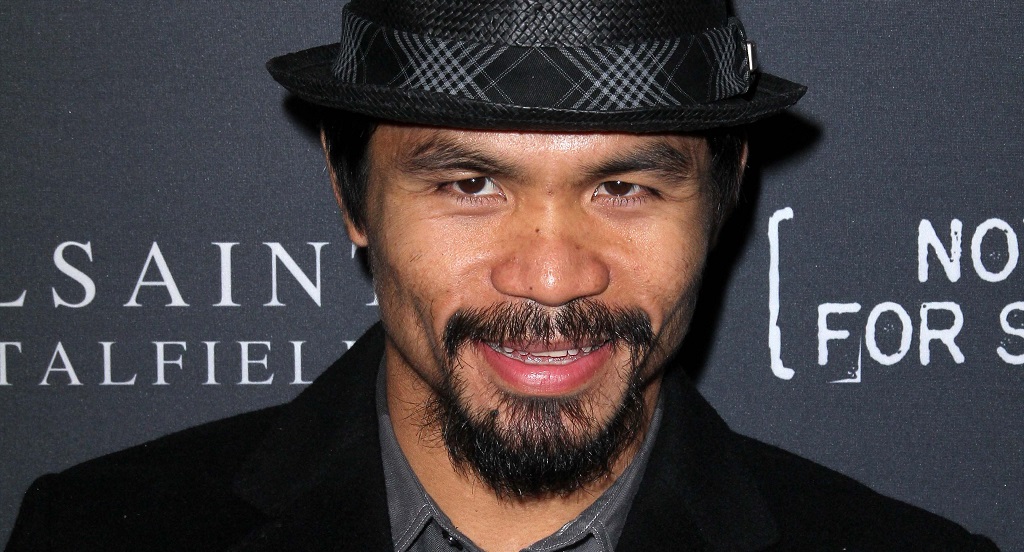 Still being an active boxer and politician Pacquiao is traveling a lot between his homeland, the Philippines, and wherever his boxing career calls him.

Time will tell when he decides to retire, but as of now, he is still going strong. Now on the subject of Manny Pacquiao retirement, many individuals say he is about ready to retire based on his recent performance, but not everyone is as good as they were when they first started?

Will He Get More Manny Pacquiao Tattoos?

In all honesty, no one would be surprised if Manny Pacquiao got another tattoo. Once you have a tattoo you only keep adding to your collection.

Manny seems to use tattoos as a way of meaning and significance, so it is possible his next tattoo may be something boxing related, maybe to his career, or a memorable win.

He may even get his next tattoo when he comes to retirement, something that may symbolize his entire career in a nutshell.

Manny Pacquiao tattoos tribal tattoos and meanings are already his things, so maybe his next round of tattoos will match his current designs. Also, maybe it will be of Manny Pacquiao record. Only time will tell!