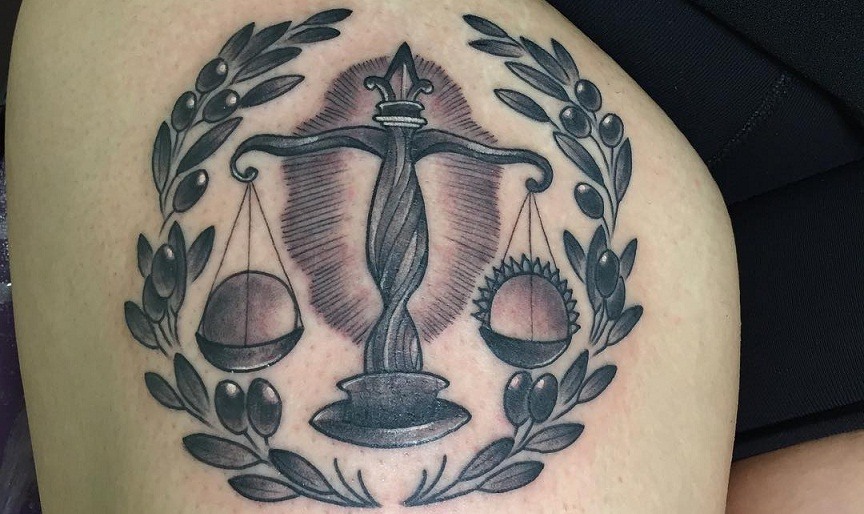 One of the most easily recognized signs of the zodiac that has found its way to body ink is the Libra scale tattoo. Many people who decide to take the plunge and get inked up, want something that connects with them on a deep level and portrays their personality for the world to see.

Many people, in fact, believe the astrological representations of their zodiac symbols are a direct reflection of who they are. The Libra scale tattoo is taking things a step further for those born in late September and early October, fast becoming one of the most popular of all zodiac ink designs.

The History Behind the Libra Scales

The scales that are associated with the sign Libra are in fact tied to ancient Greek mythology. It is believed that one of the Delphi oracles, Themis, a goddess is connected to the sign Libra. Themis was considered to be the first goddess to organize the Greeks to be obedient to the laws of the country.

In Latin culture, Justitia, or lady justice, was portrayed holding the scales and is being immortalized in Libra scale tattoos everywhere. These tattoo designs are symbolic of an even mind, balances personality, someone who weighs both sides before rushing into any decision.

The Concept of the Libra

The Libra is considered to be a balancing scale. The Libra is the only astrological sign that is non-human or animal, part of the reason that it stands out from all the other symbols. Libras are born September 23 to October 22, and astrologers believe that these dates are the best time of the year.

So according to astrology, the Libra is balanced, symbolic of being positive, ruled by Venus, charming, friendly, peaceful, romantic, diplomatic, indecisive, someone who needs all sides of the story before they make a choice.

The most popular design concept is someone holding scales, balancing them at the center on their fingers, considered to be the scales of justice.

While many people who opt for the Libra scale tattoo incorporate the scales in one form or another, they also have another version that has been getting increasingly popular over the years. For those who like to tip the scales in one direction or another with good vs evil or strength over weakness, the scales create a very easily recognized meaning in the tattoo.

For the Libra who want to keep things a little closer to the vest, they take advantage of the written symbol for the Libra sign, known as the glyph.

This logo appears like a small sun setting on the horizon, but it is, in fact, a written symbol comprised of two horizontal lines, with the top line showcasing a half-circle towards the middle. With the glyph, the design can be slightly modified with flowers, verses, or stars, to give it a more personalized effect.

Not only is the Libra scale tattoo visually appealing, the meaning behind the design speaks to the positive attributes of the wearer. Balanced, positive, patient, kind, and full of humility, the possibilities are endless with the Libra symbol.