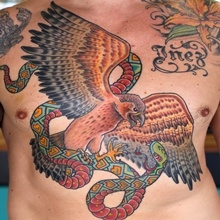 Similar to the eagle in many respects, the hawk is considered to be a bird of honor and valor. The hawk will soar high in the sky in search of prey way below, and this representative of the sun deities has come to be representative of energy, passion, and power.

Before you rush to the tattoo parlor to get inked with your very own hawk tattoos, consider all the meanings first to make certain this is something you want to connect with on a higher level.

Make no mistake about it, the hawk is perhaps one of the stealthiest hunters on the planet. They can soar hundreds of feet in the air, spot a rodent crawling on the ground, and with their keen eyesight and depth perception, they can swoop down in seconds and grab their prey before they even have a chance to run.

For these reasons and more, many body ink lovers choose this particular tattoo design to represent strength, power, dominance, and speed.

The hawk has been associated with falconry for ages, symbolic of luxury, status, and nobility.

Guardian of the Dead

Spanning across the globe, the hawk has been revered for centuries and the guardian of the dead due to their association with Horus and Charon.

Dating back to Native American ancient societies, the hawk was the embodiment of all the souls of those who have passed on, and due to their place in lore, were give honorary status in tribes as they represent long gone ancestors.

The hawk is renowned for its fighting skills, associated with power, war, and dominance. The hawk can be seen in many ancient totems, symbolic of treasured virtues and values, closely associated with an honorable person.

Today you will find that the hawk tattoos hold many of the same meanings that made it revered centuries ago. Today the hawk in a tattoo can be symbolic of honor, valor, nobility, passion, and energy.

For others, getting inked with a hawk tattoo represents cunning, intellect, and communication. Due to the association with strength and power, the hawk tattoo can be inked in a stance that shows it about to capture its prey or defending its children.

With an open wingspan in flight, this can be one of the more beautiful and captivating of all tattoo concepts.

Because the hawk is so globally recognized, it allows you to incorporate other features into the design that still commands attention and portrays power.

The hawk can be holding a family shield or crest, drawn with a variety of vibrant feather colors, or flying high with the moon and stars as the backdrop.

This is one of those designs that looks amazing as a full back or chest tattoo, yet has the same powerful effect as a smaller outline design on the hand, side, neck, or forearm.

Make no mistake about it, when you see those glaring eyes of the hawk tattoo staring back at you, you won’t know whether to tremble in fear or to run for your life!