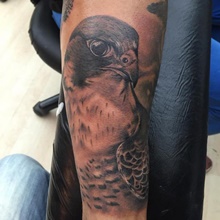 When you see a majestic falcon flying high in the sky, it conjures up thoughts of freedom and vision. These birds not only can see for miles, they can spot the slightest movement on the ground and react instantly to swoop down and grab their prey with their large sharp claws.

Those who choose to get inked with the falcon tattoos do so because they connect with the passion of this bird, and the imperial aim for higher ideals.

This noble bird has an acumen for reaching greater heights, and it has a global appeal with men and women who love getting inked.

The History of the Falcon

The ancient Egyptians knew all too well about the nobility of the falcon. They considered the falcon to be the noble consort to their sun god, Ra. For this society, the falcon represented superior vision.

Many considered this bird to be a god, the epitome of divine embodiment. The falcon possessed a raw and primal energy that appealed to these people, and they felt it represented courage, determination, and power.

The falcons could soar to the heavens and were considered to be divine. Today people choose the falcon for its beauty in flight and the fact it is a predator with incredible ambush skills.

The Association with Flight

For those who get the falcon tattoos with the bird in flight, this is symbolic on a number of levels. For some, it is their spirit soaring high near the heavens above, watching over them all through their lives.

For others, the falcon tattoos represent a powerful force that can rise above mortal challenges and thrive without fear of others.

These tattoos of the soaring falcon are representative of a person’s fearless rise, their drive to keep reaching higher, and a persistence that is unrivaled. Today, the falcon is symbolic of devotion, focus, commitment, and drive.

The Meaning of the Falcon Tattoos

Although this powerful bird can be inked in a variety of ways, soaring, perched, or attacking its prey, there is a variety of meanings that really attract ink lovers to the falcon. For starters, the falcon tattoos are symbolic of a laser focus, a person with vision to the future, and one who enjoys their freedom.

Others prefer the association with royalty, devotion, nobility, and honor. Men who choose to get inked with the flying falcon connect with the strength, honor, skill, strategy, and vitality of the bird.

Those who have had a difficult go of it feel that by inking up with the falcon, it represents for them a spiritual guide, like a guardian angel, helping them to soar above the problems of the past and reach a higher awareness.

Whether you want your design to portray clarity, aspirations, or your higher ideals, the falcon tattoos will help you get that point across. Know that if you are considering getting a falcon tattoo, it’s more than just a random statement of power.

You are in fact invoking the blinding power of the sun that is associated with this majestic creature. The falcon can guide you in your journey and commitment to a higher power.