40 Frog Tattoos With Their Unique Meanings 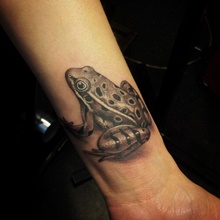 The frog has always played a very important role in human spirituality. Today you can see the frog in a variety of shapes, sizes, and colors, come to life as the preferred tattoo choice for both women and men. This unique little creature goes through quite a transformation in its life, and the meanings associated with this amphibian appeals to a growing audience each year.

These are some of the reasons you might want to choose the frog as the subject matter for your tattoo:

The Frog Throughout History

Dating back to ancient Egyptians, Heket, the Egyptian frog deity, was the fertility goddess who would be responsible for breathing life into all newborns. In Native American tribes, the frog is symbolic of change and transformation.

Tsimshian people have long believed that the frog is the link between the human and Mother Earth. Sticking with this theme, it is easy to see why people who have undergone a major change in their own lives are drawn to the frog tattoos.

They are representative of having undergone a change, awakening, transformation, and this is ideal for those who have beaten an illness, survived an abusive relationship, or change of faith.

Those who spend time in the sea or were in the military, see the frog in yet a different light. For these folks, the frog is symbolic of safe voyages or good luck.

The frog is closely associated with the element water, but can also be depicted as the liaison between the dead and the living. Today, the frog is symbolic of good fortune, purity, and rebirth.

The frog can also be a symbol of fertility for some, opportunity, and peace and tranquility. Whether a person has experienced a significant change in their own life, or they are about to begin a new journey, the frog represents for them change and good luck at the same time.

The Variations of the Frog Tattoos

Despite the many different ways the frog tattoos can be drawn, they can also mean a variety of things to different people. While the most common depictions are the frog on the lily pad or the red-eyed tree frog, tribal frogs are growing in popularity in recent years.

The tribal frog is representative of a connection with the elements, change, and transformation. The peace frog can be inked with the wings of an angel and closely resembles the artwork of the hippies in the 60s. These frogs are symbolic of tolerance, peace, and love. The Celtic frog tattoos get their inspiration from Celtic tradition and represent healing and restoration.

Despite how you connect with your frog tattoos, it is easy to see how a few splashes of color and the addition of personal elements can make this creative design all your own.

The frog is one of the oldest animals on the planet and has gone through some amazing transformations in order to adapt to their ever-changing surroundings. This is part of the appeal to the frog tattoos, something those who have seen the light or made major changes in their own lives can appreciate.