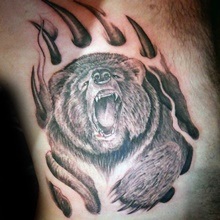 Bear claw tattoos have become quite the rage in recent years due to the fact these designs have a variety of meaning. Whether the print is from a fierce grizzly bear or a cute cartoon bear, the claw is easy to recognize.

The meaning associated with the print is dependent more on the personality of the wearer because over the years the bear has come to symbolize different things for different cultures.

If you are considering getting your own bear claw tattoos, the following information should help you to connect with your body ink on a deeper level by adding unique and personal elements to the design.

The Bear and History

The bear holds a very deep and powerful connection with the ancients, so some choose the bear claw tattoos to help them connect with their heritage.

The Native Americans had a very special relationship with the bear, believing this beast was somehow connected to the spiritual world, so they conducted numerous rituals in the bear’s honor. The Viking God Norse was thought to have been a bear.

Even early humans wore the bones of the bear to allow them to absorb some of this beast awesome power. The bear claw for these people represented bravery, strength, and power.

The Hidden Personality of the Bear

While on the surface, the bear has a fierce personality, a warrior that will fight to the death, it also has a much softer side. The bear will protect her cubs to the death, and when it comes time to hibernate, they become gentle and lethargic.

Some choose the bear claw tattoos the represent a tough exterior with a much softer loving person inside. Others prefer this tattoo to represent love and devotion for their children, and how they come first and everything else in the world takes the second stage.

Those who are one with nature appreciate this tattoo for the bear and its hibernation, a resurrection or rebirth. This is ideal for someone who is letting go of the past, moving on from a relationship, or letting go of an addiction.

The Meanings of the Bear Claw Tattoos

The bear has many traits that appeal to body ink lovers, and some get one large bear claw design while others have several footprints walking around parts of their bodies. Today the claw prints can symbolize mobility, power, stability, and good luck.

For others, the print of the bear is representative of courage, strength, protection, bravery, and motherhood. Those who have a deep spiritual connection with nature use the tattoo to remind themselves of which they came and where they eventually will be going.

The bear claw is ideal for that person who has confidence, power and is a fierce fighter, someone who does not give up at the first signs of trouble.

The bear’s hibernation habits remind some they are moving on from a time in their life to a new time full of possibilities and promise. Choosing this design for them helps to give them motivation each day to push forward because spring will be right around the corner.