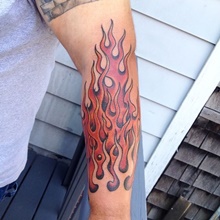 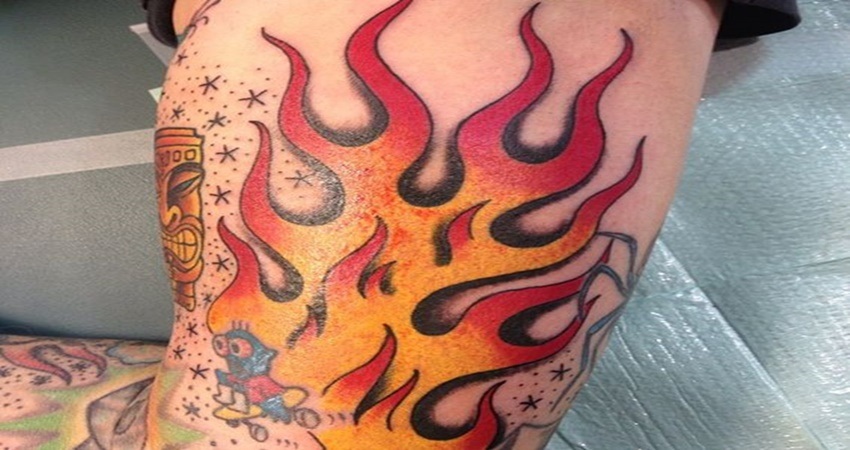 One of the reasons for the growing popularity of the flames tattoos is that they can be representative of a variety of different meanings. Whether getting flames as full-sleeve tattoos or portrayed with smoke and other personal touches, fire utilized in a tattoo design allows the wearer to really be quite creative as far as the overall look.

Man and fire go way back, in fact, it could be said that had it not been for the fire, we as humans would not have made it as far as we did through the centuries. Once a man was able to control fire, the world was his.

The man could now cook his food, clear brush, warm him, protect him from other animals or humans, and even allow him to make tools. These things are pretty much the same reasons today we need fire, except now man has founds ways to permanently remind him of that awesome power by way of the flames tattoos.

Today the flames can be representative of power, dominance, enlightenment, and a burning desire or drive.

The Good and Bad of Fire

When the fire is used in tattoo designs, it can be symbolic of either good or bad, depending on what the wearer is referencing.

On a positive note, the flames can symbolize a person with passion, someone who knows what they want and will never settle for less, and a person who is determined to reach their goals. On the negative side, the flames in a tattoo can be used to symbolize destruction, devastation, turning whatever it touches to ashes.

Considered to be one of the four elements, fire is also associated with the sun, representing life and being the creator of all things.

The Fire and Legends

Part of the mass appeal with fire and tattoos has to do with its rich history in mythology. Greek Mythology tells us that Prometheus, in fact, stole the fire from the gods so that mortals on earth could put it to good use.

Fast forward a few years and you see that the Phoenix is comprised of flames and can reincarnate itself from ashes every 500 years. When these images are utilized in a tattoo design, they are symbolic of rebirth, reincarnation, and the circle of life.

Christians associate the fire and flames with Hell, and those who sin on Earth are cast into the fiery pits of Hell for all eternity.

With such a long and rich history, the flames tattoos can mean different things for different ink wearers.

Circling a heart, the flames can be symbolic of desire, passion, and love. Flames alone on the arms are representative of temptation, change, danger, warning, and lust.

For those wanting a more religious association, the flames are the sun, Hell, the Holy Spirit, and sin. More common symbolism ranges from destruction, wisdom, knowledge, light, creation, and energy.

With so many different meanings of fire and flame tattoos, you have a number of different reasons to choose this design. The fire and flames have both negative and positive associations, therefore, meanings are more representative of the individual that the artwork itself.