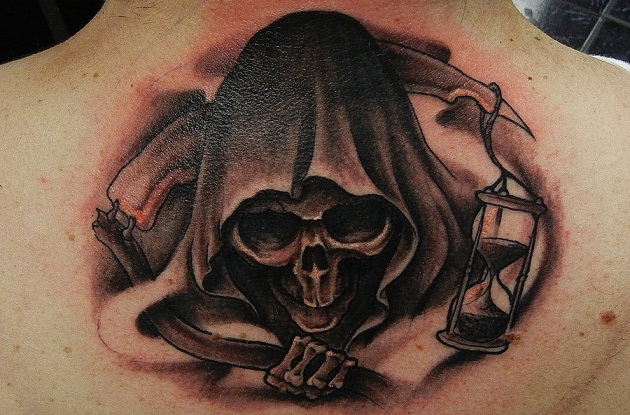 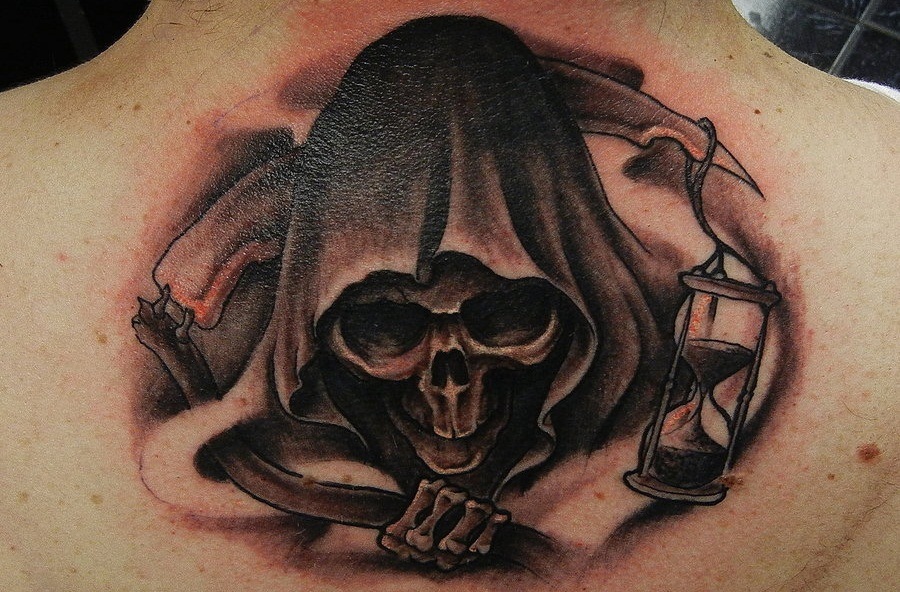 Nothing can strike fear in the hearts of man like coming face to face with the Grim Reaper himself. This is part of the allure many body ink lovers like about getting the Lord of Darkness inked on their bodies, it makes others uncomfortable and fearful. The Grim Reaper himself is a meaningful and highly symbolic tattoo design, representative of death, dying, and the dark world.

The History of the Grim Reaper

Anyone who sees the image of this tall dark figure in a black hooded garb carrying his long staff with the sharp scythe instantly recognize it is the Grim Reaper. This dark and mysterious character has been depicted in literature, art, movies, and even tattoos for years.

That long black hooded cloak often hides his face, but his silhouette is never mistaken. Legend has it the Grim Reaper will appear when a person is a few moments from their death. It’s believed he uses his scythe to separate the human soul from the rest of the body. He will then accompany the separated soul to the final resting place, Hell or Heaven.

Grim Reaper tattoos are old school tattoo styles that have been around for years. There is a variety of different ways that the tattoo design can be drawn. Most portray the Grim Reaper in a black robe with his long scythe. He can hold the scythe in a variety of ways, in front of his body or drawn over his shoulder.

Skeleton hands are commonly drawn holding the long scythe. The Grim Reaper’s face is portrayed as a skeleton skull or faceless. Since the Grim Reaper represents death, he is associated with black. Grim Reapers can also be inked in vibrant colors, allowing the wearer to appear less intimidating.

Meanings of the Grim Reaper Tattoos

Although the Grim Reaper tattoo is symbolic of death, he can also take on a whole variety of meanings. Your Grim Reaper tattoo design will best represent what you. Some of the more common meanings are good luck, bravery, and even courage.

Those who get inked with the Grim Reaper are not afraid of death at all, they are celebrating their life, exposing the fragility of time here, and showing they have no fear in the face of evil. The tattoo may be a representation of a negative force or that this person has become emotionless to certain things in their life. Darkness appeals to many, and the Grim Reaper tattoos are everything mysterious to them.

The Positive Nature of the Reaper

Understanding that after life comes death for us all, and they embrace their time here and cherish every day while they are alive. The Grim Reaper is a reminder for them that they shouldn’t sweat the small stuff and find joy in every moment of every day. This tattoo can represent bravery and courage, you aren’t afraid to meet your maker.

For some, the collector of souls can actually be portrayed in a positive manner, but like all tattoos, this is certainly something left to the wearer to decide.