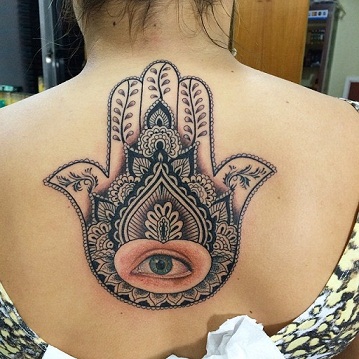 Looking for a tattoo design that has a spiritual connection and significant deep meanings? You may be the ideal candidate for the Hamsa tattoo. The basic outline of this tattoo design is the hand and five fingers with an eye in the center.

The eye is symbolic of the all-knowing, and has significant meaning with the spiritual world. The eye in the hand is believed to contain special powers, and represents a person who is living on a higher plain, connecting with all that is good in the world and rising above the negativity of the world.

The History Of the Hamsa

The hand used as the basic foundation for the Hamsa tattoo is considered to be the hand of God himself. Dating back many centuries, the Hamsa was believed to have originated with Rome and Greece culture. The eye depicted in the center of the hand is symbolic of a higher power, God, looking down and watching over a person.

Other cultures took the opposite approach and believed that the eye represented evil, used to place curses on people who had too much pride. Most cultures however saw good in the Hamsa, symbolizing a guiding and protecting force. The strong symbolic nature of the eye was meant to represent some force looking and watching everything and knowing everything.

The reason that the Hamsa tattoo is a popular choice today with those who get inked is because of the meaning behind the symbol. In addition to being able to color the hand and eye in any vibrant color, it represents being in touch with all your five senses. In Arabic and Hebrew culture the number five means Hamsa, and the hand has five fingers, a connection to the five sense we all have.

Those who chose to place the Hamsa on their body are representing protection, confidence, calmness, and bravery. Someone who is wearing the Hamsa as a tattoo wants to be connected and protected by that higher force in their life.

The Hamsa in Today’s World

Those who get inked up with the Hamsa tattoo have the ability to place this unique design on just about any part of the body. The common thread for all these tattoos is the outline of the hand and the eye in the center. Just like other tattoo designers, wearers have transformed and customized the Hamsa by replacing the eye with flowers, designs, and even symbols that have a more personal meaning.

The hand imprint is clear, but within the hand the ability to be as creative as one likes has mass appeal. Some see the hand as symbolizing having good luck, being connected with a positive force, and having a spiritual guide. Others take the approach that the Hamsa is fighting off evil, keeping addictions at bay, warding off bad spirits from this person’s life.

There you have it, everything you wanted to know about the Hamsa tattoo and why it makes such a great design choice. The tattoo symbolizes unlimited power, a higher force at work making certain that there is a balance in one’s life.