Cartoon Tattoos And Their Exploding Popularity 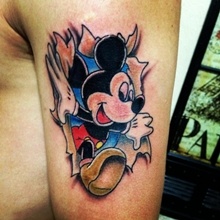 Cartoons have been popular with children for over a century, and many of the old classics have fallen by the wayside, replaced by characters of every size, shape, and personality. While only yesterday it seemed that Mickey Mouse and Felix the Cat were all the rage, today you have many television channels devotes to playing cartoons around the clock.

With so much ground to cover, we will try to focus on some of the subject matter that is making the rounds in cartoon tattoos today.

Throwback to the Classics

One reason cartoon tattoos are all the rage these days is simple, those adults are becoming nostalgic for all the kids shows that are slowly going the way of the dinosaur.

When you ask a kid today if they now who Felix the Cat, Popeye, Tom, and Jerry, or who Speed Racer is, they look at you like you spring a new head out of the side of your neck.

Many of these cartoons are a reminder of a completely different time, the days when you either had to be in front of the television at 9 am on Saturday or you had to wait a full week to watch cartoon again. Getting inked with these classic cartoon tattoos can be representative of innocence, fun, and family.

The New Cartoons are Here

Part of the reason that kids today don’t recall the classics are because they have so many choices to watch around the clock. Today you can record all the shows from one cartoon and watch them on your mobile device, computer, or television. Some of the stars of today are the Simpsons, Sponge Bob, Bob’s Burgers, or even the Mario Brothers.

One of the fun ways to depict the cartoon tattoos is taking your favorite character from the cartoon, like Plankton or Patrick, and connecting with their personality.

Perhaps you better connect with the persistence and rebellious personality of Plankton, the reckless abandon of Bart Simpson, or the innocence of Hello Kitty.

We can’t forget the comic strips, although the way technology is advancing, the newspaper should be completely extinct by the turn of the next decade. Comic strips have been around long before television, and some of those cartoon characters still hold up today.

As far as the classics, you have Richie Rich, Beetle Bailey, and Blondie, but there are newcomers like the Far Side and Calvin and Hobbes that have appealed to both young and young at heart. These characters all have their own personality, so while you may connect with Calvin’s imagination, these cartoon tattoos represent for some freedom, passion, fearlessness, and fun.

One of the great things about the cartoon tattoos is that regardless who is your favorite, you can have your own fun to transform them any way you like.

There is nothing wrong with making Hello Kitty a blood sucking zombie while turning Bart Simpson into Elvis is a unique way to incorporate two for the price of one. The bottom line when it comes to cartoon tattoos is they are all about fun and being a free spirit.