32 Capricorn Tattoos and Their Diverse Meanings 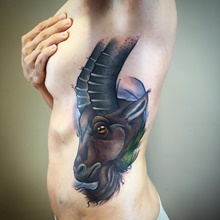 The Capricorn is the 10th sign of the Zodiac, represented by the goat, and is for those born between December 23 thru January 20.

Although the Capricorn is considered to be both prudent and practical, patient and careful, and reserved but humorous, they do have their drawbacks as well. These goats tend to hold grudges for a very long time, and they are not afraid to let you know when you have made it on their list.

The appeal of the Capricorn tattoos is they look great just about anywhere on the body, for men and women, in a variety of unique shapes and sizes.

The History of the Capricorn

This goat symbol is both an earth and a cardinal sign. Those born under the sign of Capricorn are ruled by Saturn, the planet that governs the skeletal anatomy and the bones.

Centuries ago, the goat was depicted with a fish tail, symbolic of this creature being able to dominate both land and sea. The goat was thought to have been protected and nourished under the sea by Zeus himself and is depicted as the “goat-fish” in Babylonian star maps during that period.

Those who were born under the sign of the Capricorn were considered to be very composed individuals, possessing an inner strength and an unfailing determination that was unlike others. This is where the term “stubborn as a goat” originated, the Capricorn sticks to the rules and do not waver easily.

The Power of the Capricorn

Those who fall under this sign on the Zodiac have unique abilities that make them quite endearing to others. The Capricorns have an inner strength that allows them to accomplish the impossible.

They are dreamers and have a passion for love and respect, both giving and receiving. While on the surface the Capricorn appears tough and unwilling to compromise, just below that surface is a person who is hiding their lack of confidence and self-doubt.

This is part of the reason they appear so tough on the exterior, they don’t want you to see the scared soul below.

Today, those who want to express their love for their Zodiac sign get inked in some pretty creative ways. While the tradition symbol is the goat or the glyph that look like the number 76, they all tend to have the save meaning.

Some choose to simply spell out the word Capricorn to tell the world that they may be arrogant, rude, and humorless on the outside, but inside they are funny, smart, warm, and just a little insecure. Others get inked with the small head of the goat, to symbolize they are socially inhibited and selective about who they interact with.

The Capricorn will hold their tongues before they form an opinion and rarely will change their opinion or stance once they have dug their feet in the sand.

Regardless the size, shape, or design of the Capricorn tattoos, they represent the goat, the obedient and hardworking, successful and peaceful, intelligent and determined force within. This person is down to earth and prefers things concrete and rigid, rather than open, creative or abstract.