39 Alligator Tattoos and Their Powerful Meanings 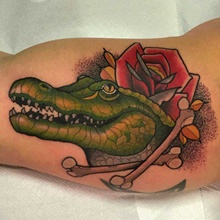 The alligator has been thriving on this planet since the days of the dinosaur. The natural survivalist has a propensity for adapting to various environmental situations, taking each challenge head on and levying the odds each century.

The appeal of the alligator tattoos has a global reach with anyone who has faced difficulties in their life, has taken on all challenges, and is determined to make it through to the other side.

The alligator appeals to both men and women because it will often only show that rough exterior until they are in the mood for love, which is when you finally get to see that soft underbelly.

The reason that the alligator has been able to thrive for millions of years is due in part to their scaly skin that shields them from their enemies. Regardless how harsh the elements or how formidable their enemy, the alligator has tough skin and will endure.

The alligator can grow to enormous size because they are at the top of the pecking order, and although man appears to be one of the few enemies that can keep them at bay, they do have a weakness if exposed.

The soft underside of the alligator makes it vulnerable if exposed, something people who have rough exteriors can relate to on a deeper level with their body art.

Over the centuries, many cultures came to respect and revere the alligator for its ability to survive through challenging times. The ancient Egyptians worshiped the alligator and often built a city in their honor.

The Mayans thought the world was in fact supported by four of these reptiles, and they held them in the highest regard. Even the Native Americans respected the alligators for both their status and their power.

Their mating call is symbolic of virility and power, and their mating dance is suggestive of how the male today will do just about anything to entice his partner. These swamp-loving freshwater reptiles drawn as tattoos can be symbolic of dominance, power, strength, and fearlessness.

The alligator can be drawn in a number of ways which represent a number of things. When the alligator tattoos are drawn with open mouth and large teeth, it is symbolic of power, dominance, strength, and the ability to take on all challenges.

Others prefer to have this reptile hiding in the weeds, symbolic of hidden powers, being underestimated, and having the ability to pounce when the opportunity arises. The alligator tattoos for some are a representation of their status, their danger, of creation, or having balance.

Others see the alligator having unrivaled intuition, masculine power, and the ability to surprise others who underestimate their power. The alligator is an ambush predator, and this trait appeals to those who can spot opportunities in life to take what they want and run.

The alligator on the surface is certainly a creature you should carefully deal with, but just like their underbelly, they do have a softer side they will only show when the time is right.