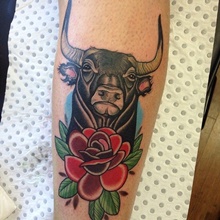 There is little chance that you will mistake the bull tattoos for anything other than this powerful beast. They have been growing in popularity as a design for body ink because the meanings associated with the bull are quite diverse.

Before you sit at the tattoo parlor to get inked with a charging bull design, it might be wise to first pay close attention to all the different meanings that can be associated with the bull.

The Bull and Ancient Cultures

The bull has been worshiped by many different ancient cultures because it is the epitome of its regal presence, power, and virility.

The bull has been considered to be a very sacred animal in ancient Greece, Mesopotamia, Greece, Egypt, and Rome, to name just a few. The bull was commonly offered as a blood sacrifice during many different ceremonies in these cultures.

Not only as the bull looked upon for its incredible power and strength, it was thought to be one of the most virile beasts on Earth. It would go on to become the symbol of fertility and man’s ability to procreate.

Over the years, the bull would go on to represent more than just its physical features. The bull had the ability to extend the clan and was later associated with solar energy while the females were considered to be the earth energy.

The bull became associated with wealth, provision, and luxury, and was a source of income for their owners in many different forms over the centuries.

The symbol of the bull later was symbolic of strong willed, someone unwilling to compromise, almost to the point if being belligerent. The bull tattoos can represent for many today an unbending personality, someone who is bull-headed or possess a stubborn personality.

Many men who get inked with the bull believe it can enhance their sexual strength and endurance.

Modern Sense of the Bull

The bull in modern times can mean a variety of things for both men and women. Today the bull symbolizes confidence, strength, and stability.

When getting inked with the image of the bull, the larger the drawing, the more powerful the message. A large bull drawn on the back or chest can represent stamina, provision, and unrivaled confidence.

For others, putting the bull on the bicep or shoulder is symbolic of helpfulness or possessing a determination that can not be derailed under any circumstances. As you can see, the bull tattoos are more than just someone trying to show off that they are powerful.

Women choose the bull to represent they are bull-headed, stubborn, unwilling to compromise. Men like the bull tattoo because it shows they are the alpha male, someone full of confidence, a person who does not give up easily.

The size of the horns and the bull itself can also change the meaning dramatically.