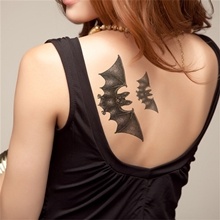 The bat is a creature of the night, that is the thing nightmares are made of. Even before the bat become a popular symbol for Dracula himself, these nocturnal creatures have been feared and revered for ages. The reason many people simply are terrified by these little creatures is because they are completely misunderstood, and as legends and myths grew, so did the fear of bats.

Let’s dig a little deeper into the different associations of the bat:

The Bats and Early Man

Dating back to early man, bats were seen as an extension of the underworld because they were always seen emerging at night from dark caves around the world.

These pathways were often considered to be the gateway to the underworld, so the bats simply got linked up by association, respected and feared at the same time, eventually becoming symbolic of decay, destruction, and disease.

The Oaxacan tradition associated the bats with jealousy and rage, Nigerian folklore had the bats doing harm to others at night, while the western views were of vampires, devils, and demons of the night.

The Popularity of the Bat

Fast forward today and goth society is only one example of how things that used to go bump in the night are now appealing, loved, and even worshiped.

The bat has undergone what seems to be a complete transformation, for example, even in China the bat today represents longevity, happiness, and prosperity. In Europe, the bat can be seen in numerous family crests and shields, symbolic of family and rebirth.

Even though many societies today still see the bat as a symbol of death and darkness, others see that as being reborn and renewed by none other than Mother nature herself, deep in the wombs of deep dark caves.

The bat tattoos run the full range of representations, from completely evil to absolute happiness. For some, their bat tattoos can mean illusion, death, darkness, evil, and the devil reincarnated. These tattoos are often drawn dark, gloomy, mysterious, and scary.

Others take a completely different approach and see this misunderstood night-creature as symbolic of intuition, rebirth, communication, journey, travel, happiness, and prosperity.

One of the appealing aspects of the bat tattoos is that you can have it inked in a variety of styles that can help to alter or enhance its meaning. The Goth movement draws about everything dark, so gloomy trees, dark caves, anything to help this dark, fear-inspiring, mysterious creature enhance its negative reputation.

Others love the duality associated with the bat, and how it can represent the harbinger of death on one side and renewal on the other. Yet, on a completely different note, some admire all the beautiful representations of the bat, uninhibited mind, free spirit, and the ability to rise up from the darkness and soar high into the sky.

As you can see, with the bat tattoos, you can choose from either side of the spectrum of meanings and in between to make your tattoo truly your own. Perhaps the fact this little creature is so misunderstood just adds to its growing appeal each year.