25 Superb Ankh Tattoo Ideas For Everyone 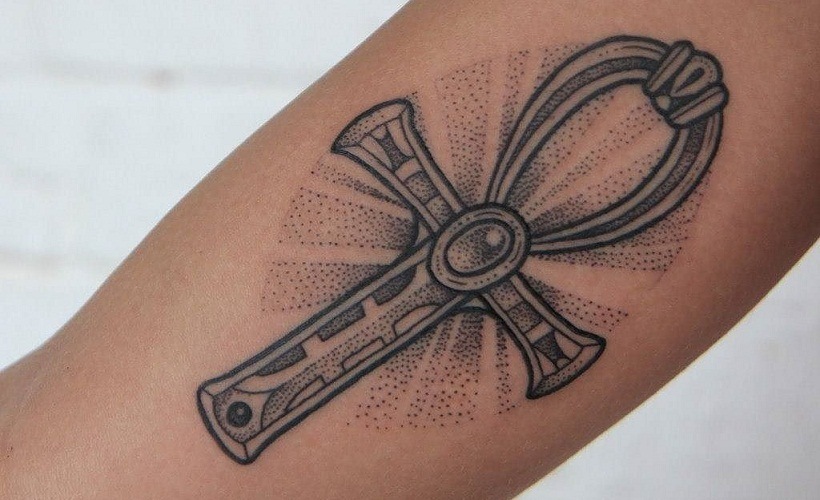 To get a visual on the Ankh symbol, you simply imagine a stick figure with no legs and a line straight through the middle in place of the arms. At the core, the Ankh symbol represents the abundance available to all mankind and the representation of life at the core.

This is a very simplistic tattoo design, and for that reason it brings mass appeal to both men and women. If you are on the fence about choosing the Ankh tattoo for your body art, here is everything that you need to know about this ancient symbol.

Before you can make the determination if this is the right tattoo for you, it helps to get to the core of the design and what each part of the Ankh represents. Looking at the top of the symbol is the loop, and it holds a very important designation with history.

The loop represents the sun as it becomes one with the Earth’s horizon. The earth and sun union is the core of the Ankh symbol, profound in the ancient Egyptian mindsets from where this unique symbol originates.

It was long understood that the sun gently kisses all the lands of Egypt, essential for providing both growth and abundance. The combination of the Earth with the all-powerful sun and waters provided all the life in Egypt as it continued to prosper.

Another deeper representation that is associated with the Ankh symbol is that it is a unique combination of the female and male powers with their connection to the Earth and sun.

These unique associations have a very sacred meaning to the Egyptians, who associated it with the union of Isis and Osiris. The idea of using the Ankh symbol in modern tattoos has global appeal for those who especially put a huge emphasis in their life on the family.

Many people getting the Ankh tattoo also incorporate their children into the symbol to express the expansion of their growing family. Women who are considered to be the life-giving force in the world and utilize the symbol on their ankles, shoulders, and even above the breast.

Meanings of the Ankh Today

One reason the Ankh symbol is so popular today as a tattoo design is the various meanings that can be associated with the core beliefs of the ancient Egyptian symbol. It can represent a special magic power, the expansion of life, ultimate power, and the all-knowing truth.

The symbol has a connection with the spiritual world, vision, and authority. Considered to be sacred, the Ankh symbol can also offer a wear protection from certain evils, unlocks the doors of mystery, and connects with the after life. It also references immortality, unification, hidden wisdom, and future evolution.

The Key to Your Tattoo

The mystery surrounds the Ankh symbol does appeal to a wide audience who also feel they have some degree of mystery they like to keep hidden from the world. The ancient Egyptians believed that the Ankh symbol was a key that could unlock the doors of the afterlife, allowing them to enter the realms of the dead.

The symbol for people today could symbolize for them something hidden just below the surface that they do not want to share with the world, but to use as a reminder for themselves. It could be that it symbolizes the conquering of an addiction, the survival of a deadly disease, or the moving on after losing a loved one.

Many people believe that the loop on the top of the Ankh symbol is a portal to the other side of shifted consciousness and altered state of being. Many Ankhs have been discovered in Egyptian funerary art to solidify that belief.

Whether you believe that the Ankh tattoo is about the life to come or the afterlife, it might be that you feel there really is no death and we move from one conscious experience to another by way of this key.

Today, many people take the ancient meaning and incorporate it into their own lives through various changes to the surroundings in the tattoo. Regardless the complexity of the design, it has a deep and meaningful attachment to the past that is very appealing to those in the world today.