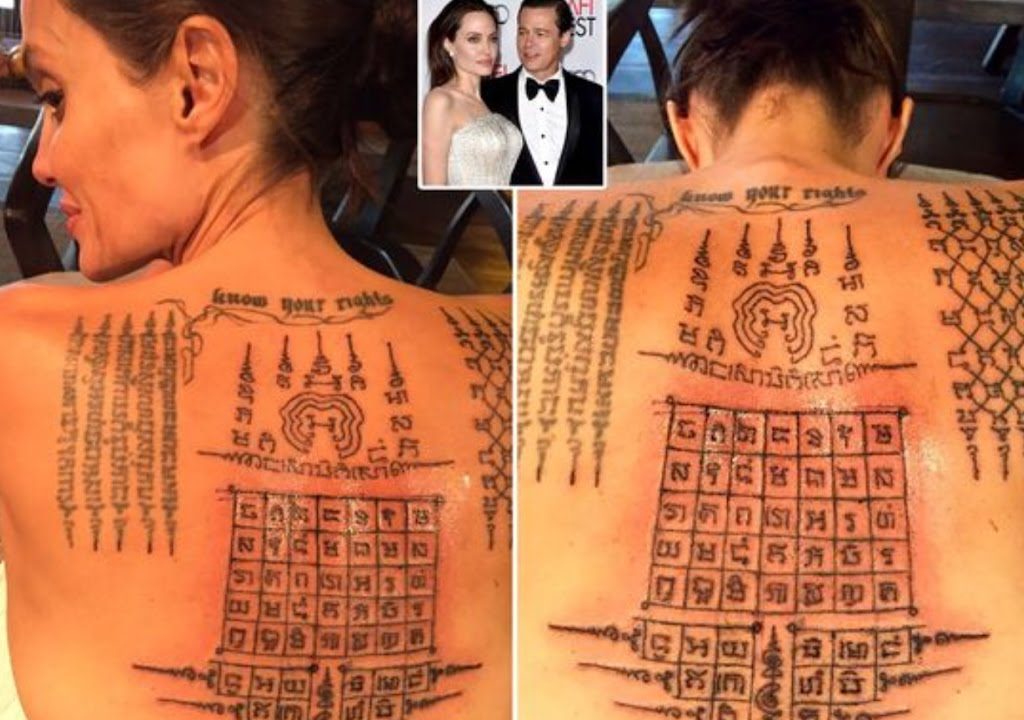 Angelina Jolie is known around the world for her acting talents, her beauty, and her activism. Time and again, Angelina has made headlines for various reasons and never strays too far from the public eye.

Yet very few people know that this star is a tattoo enthusiast and has no qualms when it comes to going under the tattoo needle to get some new black ink.

Some of this ink is to cover up old tattoos and a few of the tattoos she’s gotten over the years have been removed, but overall, many of her tattoos have a meaning behind them.

So here are Angelina Jolie’s many tattoos and their meanings.

Gothic Script Tattoo on Upper Back: This tattoo at the base of her neck reads, ‘Know Your Rights’ which is a title of a song made by her favorite band The Clash.

This one was done in 2004, and she sees the script as a verse of empowerment.

Khmer Prayer Script on Left Shoulder: This tattoo was done back in 2003. The prayer is a Buddhist Pali incantation and was meant as a dedication to her son Maddox, whom she adopted in Cambodia.

It is meant to protect him from any bad luck.

Arabic Script on Right Forearm: This tattoo was originally a coverup for a tattoo that Jolie got with her ex-husband Billy Bob Thornton.

She got this tattoo in 2009. The script is said to mean ‘Determination’, however, Jolie takes it to mean ‘strength of will’.

In 2013, she got another line of Arabic text alongside her right forearm after getting her double mastectomy.

Roman Numerals on Left Forearm: Jolie has two different roman numeral numbers inked on her left forearm. One is the number 13 and was done to show that she wasn’t superstitious and doesn’t believe in it.

The second set of numbers is the date of Winston Churchill’s famous speech that she got added to her arm in 2009.

Tennessee Williams Quote Inner Left Arm:  This quote is a prayer for the wild at heart who are kept in cages. Jolie has this inked on her arm because it is something she relates to.

The meaning of this tattoo is that she hopes people can find their happiness, break from their cages, and live free.

Cross Tattoo: This tattoo located on the left side of her hip covers up a dragon tattoo. Next to the cross tattoo is a Latin script that means ‘what nourishes me is also what destroys me.’ 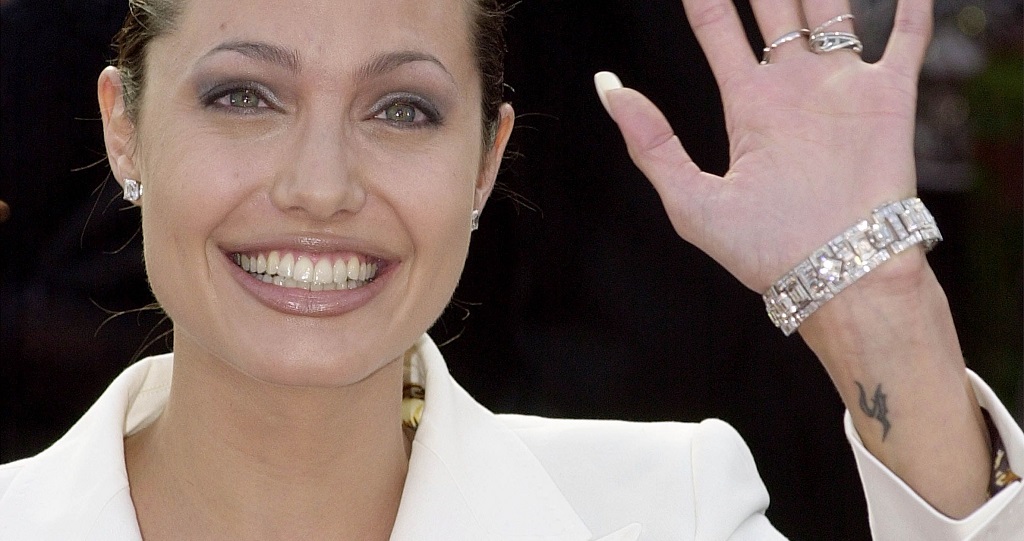 Geographical Coordinates on Upper Arm: This tattoo contains the geographical coordinates of all her children’s places of birth as well as her estranged husband, Brad Pitt’s place of birth.

Bengal Tiger on Lower Back: This tattoo was done in 2004 to celebrate Jolie becoming a Cambodian citizen.  The artist for this tattoo, Sompong Kanphai, tattooed Jolie on several other occasions including her Khmer tattoo.

Billy Bob Upper Arm Tattoo: This tattoo Jolie got back in 2000 to honor her husband at the time, Billy Bob Thornton.

However, after the two split, Jolie got the ink laser removed in 2002. According to Jolie, it took 5 clinic visits to get it removed. 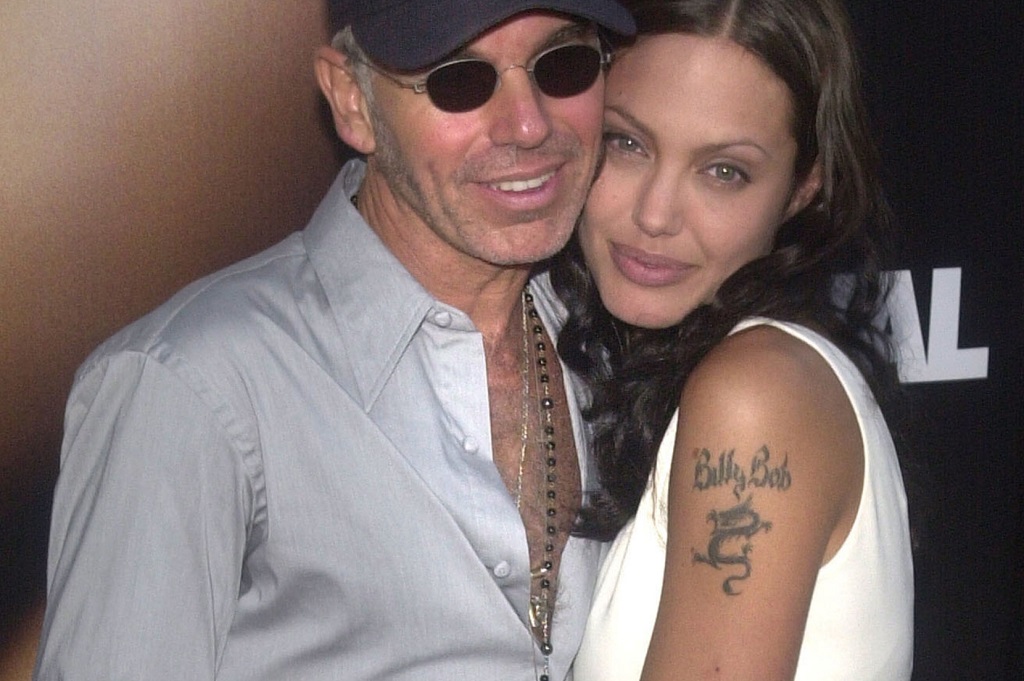 Where the tattoo once was on Jolie’s arm has now been replaced with the geographical coordinate tattoo.

Death Tattoo on Left Shoulder: Jolie’s first ever tattoo was the Japanese script for death. To Jolie, the tattoo was a reminder to live. However, this tattoo has been removed and what replaces it now is her Khmer tattoo.

Dragon Tattoo on Pelvis: While Jolie was drunk in Amsterdam, she got a dragon tattoo with a blue tongue on her hip.  She regretted getting it immediately and soon it was covered up with her cross tattoo and Latin script.

Abstract Design on Right Arm: This tattoo was designed by Jolie and Billy Bob before they split. She now has it covered with her Arabic script tattoo.

Japanese Script on Right Arm: Jolie and her ex-husband Johnny Lee Miller got matching tattoos. It was the Japanese symbol for courage.

Jolie says she got it removed because it didn’t feel like her tattoo. It’s only normal for people to remove what they feel like are temporary tattoos, especially if they are no longer suitable.

Lower Back Window Tattoo: This tattoo was inked to symbolize how Jolie was always looking out of windows and wanting to be somewhere other than where she was.

However, this tattoo is now covered by her Bengal tiger tattoo. She wanted it covered because now she believes she is where she wants to be.

Large Back Tattoo: Jolie’s latest tattoo was done in early 2016. Brad Pitt got a similar tattoo and the ink was said to bind the two together.

Instead of using the latest new tattoo power supplies, steel rods with surgical needles attached were used to ink Jolie with this detailed tattoo in what many say would be a painful experience.

However, it is more accurate than your everyday tattoo gun.