30 AK 47 Tattoos With Meanings and Their Exploding Popularity 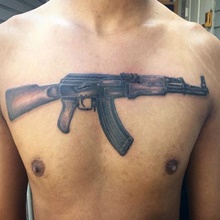 One of the hottest tattoo designs this year has to do with guns. In fact, the bigger and worse the gun, the cooler the tattoo and the deeper the meaning. No other gun is as easily recognized as the AK 47, it strikes fear into the hearts of enemies and can deliver a lethal blow in seconds.

Men and women of every age are finding that the AK 47 tattoos help them express themselves more easily, getting across their point without having to utter a single word. This design is not just cool to look at, it has become a fashion trend this year.

Here are some of the reasons the AK 47 tattoos are all the rage these days:

The Gun and Freedom

Guns allow people to have the ultimate freedom. Freedom from being attacked by their enemies and the freedom of expression that comes with being a gun owner. AK 47 tattoos are the pinnacle of these particular designs because they are one of the most easily recognized guns in the world.

Once a person gets a gun, they feel this is more of an extension of themselves rather than just a weapon. The gun gives a person power, added strength, and resilience against troubling times.

The AK 47 tattoos represent for these folks having the right to not only bear arms but to wear arms too. Some choose this design to represent they will fight to the death to keep their freedom alive.

The Guns and the Heart

The heart symbol and guns in a tattoo are symbolic of a number of personal meanings. Some place the gun over their heart to represent their love for their weapon. Others have a heart drawn and surround it with the guns to symbolize power, strength, and freedom.

This person is willing to die for their freedom, something many military men and women utilize in tattoos as a representation of their devotion to their family and their country.

The Beauty of the AK47

Make no mistake about it, the AK 47 is truly a work of art in some people’s eyes. It embodies beauty from end to end, despite being a killing machine.

Women love that the AK 47 for them can represent something so stunningly beautiful on the outside, but just below the surface is a killer who will unleash a fury unlike any seen before if provoked. Just like the gun, the AK 47 is not deadly on its own, it has to be manipulated by the owner.

For these folks, the AK 47 tattoos are symbolic of justice, rage, dominance, and protection.

This is one tattoo design that really gets right up in your face. There is no secret here that this tattoo is representative of power and strength both on the inside and outside.