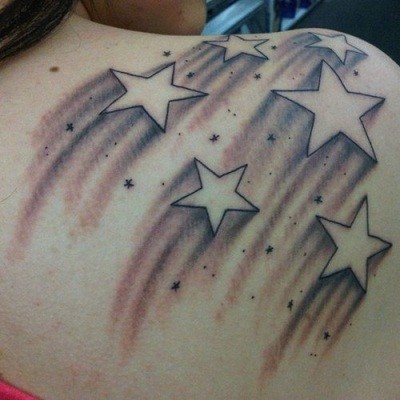 The idea of wishing upon a falling star was simply a carryover from the days when these burning messages appeared in the skies. Seeing a shooting star is considered to be good luck, part of the reason today that many people wish upon a falling star.

For those who love getting their bodies inked, they may choose the shooting star tattoo design simply because it really looks amazing with artistic tailing and swirls about. When designed in multiples, these tattoos really stand out.

The symbolism of the shooting star when designed as a tattoo often means something to do with being lucky, having good luck, or always being in the right place at the right time.

Others use the tattoo to symbolize their connection with their creator, and in the tail of the star can be a scripture verse or words that have deep meaning to the wearer. The three shooting stars can represent the holy trinity, or positioned in a way to represent the three days prior to the crucifixion, or the Father, Son, and Holy Spirit.

The appeal of the shooting stars means it can be customized in a way that appeals to an even larger audience. Those who have an affinity for music turn the star tailing into a musical score complete with different notes trailing behind.

Some choose to place the initials of someone that has passed in the star and represent them traveling in the afterlife and always just a glance away from our world. One of the most creative tattoo designs is having the star leave behind a tailing that it is the shape of a heart, symbolic of a deep connection to another.

These stars can be inked in various sizes, colors, and look great on the ankle, arms, back, even in tiny form behind the ears.

In addition to the shooting star tattoo meaning good luck or having that deep connection with spirituality, this design goes much deeper for those who fall in love with the artwork. The stars shooting across the body can represent a person who has a free spirit, someone who is unique, who feels they have much to offer the world, and soar above many obstacles that are placed in their way.

The shooting stars can represent a person who favors the dark, who is a moon child, and someone who is as complicated as the stars are different. These tattoos can symbolize the leaving behind of obstacles and rise above to new heights.

Many shooting stars pass by the Earth and leave behind their mark to those lucky enough to see them. This is part of the appeal of having these images inked on the body. They represent a person who feels they have something to offer and are unlike anyone else on the planet.