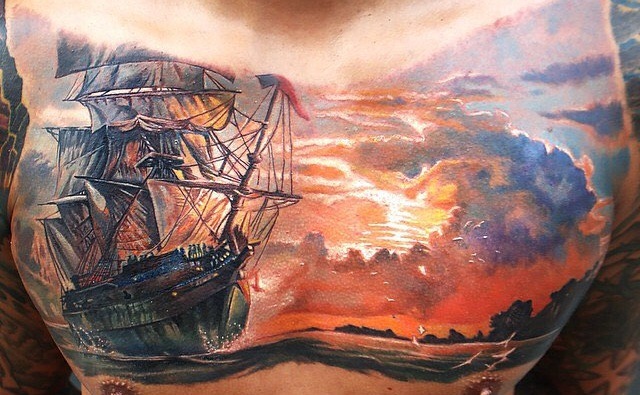 Nautical designs, pirate ships in particular, have been a popular tattoo choice for body ink lovers for decades. Traditionally worn by men, ladies are coming on board and realizing the appeal of this fun yet mysterious vessels and the people who rode them.

Surrounding the pirate ship with different symbols like swords, pirates, treasures, and pirate flags, only add to the draw of these designs. Usually, they start off small but wind up quite large, so the location of the tattoo should be carefully considered before getting inked.

History of the Pirate Ship Tattoo

When it comes to any type of nautical body ink, the pirate ship tattoos tend to rate as some of the most popular. Pirates and sailors used to get tattoos to help others identify which ship they were aboard. The pirates were not the fun loving booty hunters you see depicted in movies and television shows, these were cold-blooded killers who had a never ending lust for anything women, money, or booze related.

That old school devious mentality appeals to many today, and showcasing pirate ship tattoos on your body could be a way to stake your claim, defend your family, or just tell the world you are a rebel at heart.

The pirates were at their most menacing when they were sailing in their ships on the open seas. Unsuspecting vessels were often overpowered and most certainly met with a very painful death.

The sailing pirate ship tattoo symbolizing power, strikes fear in the hearts of others and represents someone who is not afraid to get their hands dirty doing what they believe in.

These sailing ships are easily customized with billowing sails, empty masts, birds, mermaids, storms, sun or moon, or a coastal landscape. For many the pirate ship tattoos represent home, for others the beginning of a new journey or being immersed in nature.

The allure of the pirate ship makes it the perfect tattoo design for those who have chosen a certain way of life that does not conform to what society sees are ideal. This is why many gangs have pirate related tattoos, it portrays them as brave, independent, and self-sufficient.

For others, the code of the pirate appeals to them, and they honor the men of the past with these pirate ship designs to showcase a troubled past, a change in direction, or simply dealing with life’s challenges. The pirate ship in tattoo form can also be symbolic of a memorial for a friend or family member who has passed.

Transform your own pirate ship tattoo by adding in a few symbolic designs related to the sea that have even deeper meanings. Incorporating an anchor is symbolic of stability or home, while the compass represents faith or direction.

These fun tattoo designs certainly leave many possibilities open to your imagination, and whether you are a fan of the dark or silly side of the pirate life, it is whatever works for you.