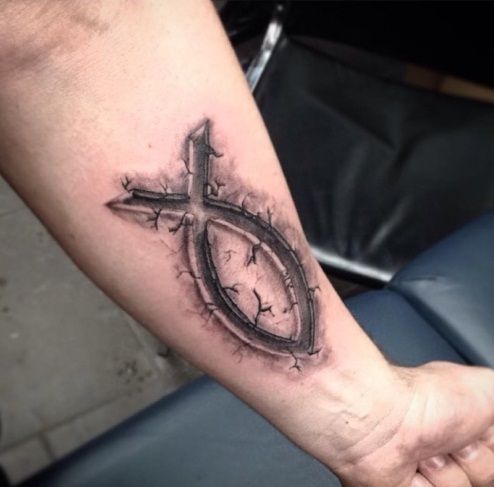 One of the most easily recognized religious symbols is the Jesus fish, and it has been gaining in popularity for those who love the idea of inking their bodies with their beliefs. This holy symbol can be worn on different body parts, and God-fearing men and women have come with some very creative ways to combine their faith and their personal beliefs into one.

The History of the Jesus Fish

The inspiration behind the design of the Jesus fish tattoo is rooted in the idea that Jesus was able to feed millions of people by multiplying two fish. The simplistic design of the fish makes it easily recognizable, and when drawn in conventional form is a nod to those Christian ideals.

The design is simple and ancient, two arcs that are intersecting each other at the tails, nothing more or less. Where the fish is inked on the body can alter the meaning too, like the wrists, feet, or the heart.

The Variety of Jesus Fish Tattoos

For those who want a permanent reminder of their faith yet feel the need to add a twist of their own personality, what better place than to start with the Jesus fish tattoo.

Beginning with the basic outline of the fish, a simple eye can be drawn into symbolizes that deeds are being watched by God.

By placing the Jesus fish tattoos on the wrists, it can be symbolic of where Jesus had the nails driven in, a reference to suffering in silence, dealing with overwhelming pain or loss, and putting others above oneself.

By adding in the name of the Lord before or after the fish design, it represents the filling of the nerves with hope and energy. Combining four fish tail to tail makes a unique cross design, basically doubling up on the religious connotations of suffering for others.

By placing the up and down arrows inside the fish’s body, it indicates God is always with us in high and low phases. Placing the word “Darwin” inside the fish symbolizes the relationship between spirituality and science.

The Jesus fish tattoo is deeply rooted in religion, but many ink lovers have found creative ways to customize the design and make it their own.

Today the fish is symbolic of love, power, healing, giving, freedom, and even pain. Combining the location of the tattoo plus some other symbolic references really heightens the appeal of the image for those who have a serious connection with their maker.