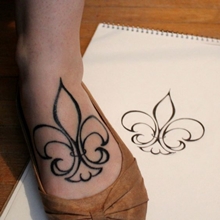 While you might not know what the Fleur de Lis tattoos look like by name, once you see them you will understand exactly what they are.

These symbols have been used for Western European royalty for centuries, and represent a very specific set of standards that was held in high regard by the nobility.

This symbol could be found on city emblems and coats of arms from around the world today, and its unique shape and meaning have attracted an odd group of individuals, the body ink lovers.

One explanation for the Fleur de Lis symbol is that it gets its unique shape from the iris flowers that grow along the Lys River in France.

The word Fleur de Lis actually translates to mean lily flower in French, so it may be this symbol has roots to the lily as well. With all these associations to flowers, it is no wonder that the symbol is closely regarded to be associated with feminine purity.

While this is one of those designs that looks great on both women and men, at the core it has a more female connection.

While the symbol does have a long history of being connected with different regal families, at the core it does command certain prestige. Those who understand this symbol know that it is symbolic of integrity, dignity, nobility, and honor.

Today, people who choose to get inked with Fleur de Lis tattoos have a respect for certain history, and they also connect with the philosophy of honor and family on a deeper level.

To these folks, honor within the family is everything, whether they are getting inked as a remembrance of deceased loved ones, or as a tribute to their family history.

One reason that this symbol has gained increasing popularity over the years is because of the associations today. In Christianity, this symbol is actually tied to the Virgin Mary, representative of her divinity.

For men, the Fleur de Lis is the team symbol for the NFL New Orleans Saints. Many choose to get the Fleur de Lis tattoos with the name of the team to further enhance the connection with support for their team.

While this symbol dates back centuries and was used to signify honor with one’s lineage, today the balance and symmetry of the design have attracted a whole new audience who appreciate the beauty more than the history.

The Fleur de Lis tattoos have been a staple in Italian, Spanish, and French history for years, but that connection to nobility and honor are what has pulled it to today and given it new life in the form of body ink. Those who have a deep respect for their family and honor tradition have come to know this symbol and respect everything about it.

This is one of those designs that needs no explanation, you either understand it at the core for its association with nobility or you appreciate it for a beautiful piece of artwork.