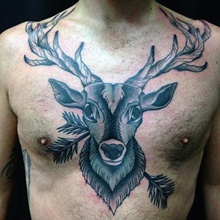 The deer can be symbolic of soft, nurturing, and kind, while on the other hand can be representative of power, dominance, and strength. Many people today are opting for the deer antler tattoos because they can symbolize more than just the leader of the pack or the protector of the herd.

Just like how every deer has different size antler, the meanings associated can vary significantly depending on many factors.

The deer has been the subject matter for many ancient people dating all the way back to when people drew in caves. The larger the antlers are drawn on the deer, the more powerful the image.

Those depictions are still relevant today, as the deer antler tattoos can symbolize strength, power, fertility, virility, purity, and piety.

Those cave paintings from 14,000 BC paint a picture of how the ancient man felt about the deer, most of the time to represent male sexuality. By the time the Romans took control, they associated the deer with their goddess of hunting, Artemis. The image of the deer is symbolic today with freedom, longevity, and also solitude.

Fast forward to the time of the Celtics, and they depicted the deer as a mighty force in the woods. The deer antler tattoos can represent the same things the Celtics considered the best in these creatures.

Although already considered a powerful beast, the deer, and his antlers were also responsible for blazing trails, for clearing the way in the woods so the weaker female and children could easily follow behind. This mighty stag would cut a path through the thickest forest so that those behind him could have an easier go at it.

Today ink lovers connect with that dominant force, a leader in tough times, someone who is willing to sacrifice for the rest of the group.

Take one look at the size of that rack on the deer and it can strike fear in even the strongest of foes. This dominant creature of the forest is savvy in that it can find the best herbs in the woods with little effort, but those antlers have a different meaning for those who love getting inked.

Similar to how the deer has that uncanny sense to find the green in life, the deer antler tattoos symbolize the best of life for many. Whether they connect with some and their creativity, spirituality, abundance, or watchfulness, many who choose this particular tattoo design are looking within to find the treasures hidden inside.

The more dominant the antlers in the design, the more important the message. Some like the fact the design screams power, while others are happy knowing the meaning is more personal and takes some work to discover the green inside.