Sword Tattoo Meanings Across The Globe 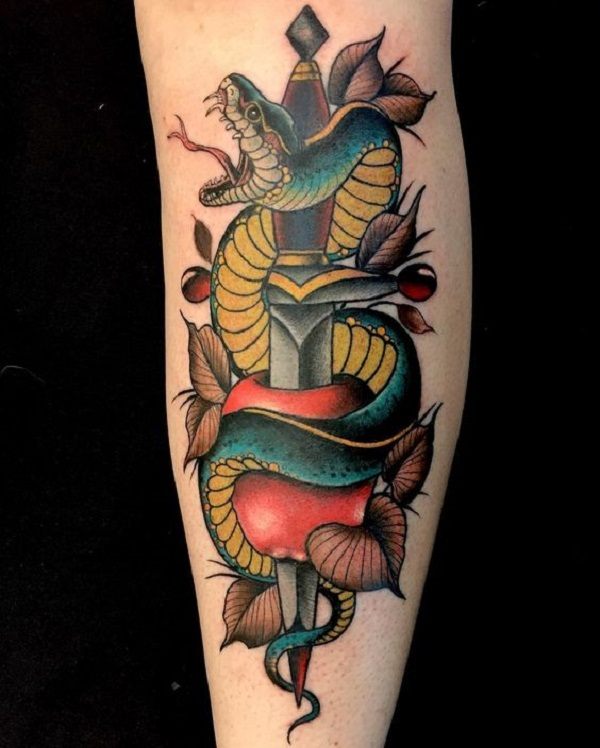 The sword is a powerful symbol that is used in many different cultures. It is a tool that has been forged in fires since weapons became the norm in society. Swords represent power and justice, yet as we dive deeper into the meaning behind the symbol we see that everywhere has slightly different connotations.

The symbol of the sword comes up in many traditions and faiths which have been handed down throughout time. The words associated with this symbol are that of:

The Right Of Passage

The sword is the symbol of Knighthood or of being a ‘warrior’ in more primitive periods and when ceremonially presented for the first time, the recipient was confirmed to a higher social standing. To qualify for this opportunity, it often required proof of a specific bloodline  and training, but in special situations these formalities were omitted.

When a Swords card turns up in your Tarot reading, it’s likely you will face a challenge, or will encounter a forceful situation or person. You may find yourself struggling with the truth or being rigid. You may face an argument or heartbreak. If you let them, the Swords cards can rid you of your denial and teach you valuable lessons.

Furthermore, Buddhism recognizes the sword as a metaphor in that the sword cuts through ignorance to reach to the truth in all things “cutting through” wrong thought. It conquers over evil spirits.

The Mayans felt a strong connection and interest in the division of the physical and spiritual plane. The sword, with it’s double blade edges, literally cuts through the veil of reality and brings individuals to the next world – whether by sacrifice or loss of life during battle.

The Celtic sword symbolized to its owner power, strength, honour and ultimate glory in battle. The fine quality and extraordinary skills required to produce these swords meant that they were extremely expensive and normally reserved for nobles and chieftains.

In Celtic mythology, the sword has always been associated with the first king of the Tuatha De Danann, Nuada Airgetlam. The tattoo as a Celtic symbol can symbolize immense power, honor, and nobility, and purity at heart. The sword was often buried with its owner amongst his many other possessions, or symbolically thrown into water as a gift to the gods or spirits.

The Japanese sword (nihonto) has traditions dating back thousands of years. A Samurai’s sword represented his soul. The sword was the symbol of the Samurai class and a Samurai carried two of them, the long katana and the shorter wakisazhi, passed down from one generation to the next. Together, they formed the daisho (long and short), the Samurai’s basic weaponry, which was carried on his left side during times of peace, with the blade pointing upwards.

Like any tattoo, the meaning is associated to the what the person believes in. There are plenty of ways to get a sword tattooed on to yourself; either a detailed design or along with other elements. Whatever you may lean towards, there are hundreds, if not thousands, of designs and concepts to work with.

Whether the tattoo has a single rose, a bunch of roses climbing up the vines around the sword, delicately framing the sword, or a rose(s) being pierced through with a blade, this design concept is quite popular among men and women.

A series of roses encircling a sword can demonstrate the power of love and its ability to quell conflict, while a sword piercing a rose can indicate heartache and loss.

Along with the meanings associated with the sword, adding a coiled viper, cobra, or other snakes in the design can also symbolize pride, defense, rebirth, and fertility. If the design has a sword piercing through the snake, then the tattoo can represent an individual’s struggle in life, and fighting to overcome it.

Sword tattoos with dragons can represent a few things. The first is a tribute to Asian heritage as  both the dragon and the sword are important symbols in that culture. Dragons are also a symbol of change, growth courage. Those who tattoo both symbols may be overcoming a challenge or facing a long life fear that they can finally escape from.

The sword is one of the oldest symbols that transcends culture and location. Many people demonstrate their love of swords via tattoos. Select a design that you truly believe in, and make the decision of getting the tattoo inked only after deliberate consideration.

Have a look at some other cool sword tattoo design.