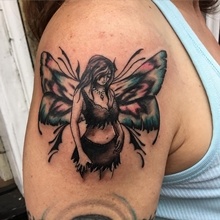 Mention the word fairy to a group of people and the first word they say are Tinkerbell. Then they associate a cute, fun, and mischievous spirit who only has the best of intentions. While this may be true of some fairies, there are many that are considered to be fallen angels with a devilish side. What that means for those who love getting body ink is that you can customize your fairy tattoos to match your unique personality.

The Tales of the Fairies

The fairy has been a part of folklore dating back to the days of the Celts. The word fairy is derived from the Latin word fata, which stands for fate.

Tales of these fairies became popularly known as fairytales and were once believed to be demons or fallen angels who were responsible for fulfilling the desires and wishes of humans while creating mischief at the same time.

These little spirits can play both sides of the fence too, representing innocence and mischief, defiance and obedience, and immodest and demure. By splitting the personality of the fairy, these fairy tattoos really take on a life of their own.

The Fairy Tattoos and Their Meanings

Perhaps the reason so many people are drawn to the fairy tattoos is the meanings associated with these little winged creatures.

The following meanings are based on folklore and embody everything about these magical creatures. On the one hand, the fairies are symbolic of grace, beauty, femininity, and youth.

Then they can also be representative of innocence, a spirit of nature, something that grants wishes and fulfills desires. Regardless the size, color, or design style of your fairy, at the core, they are seen as mischievous, playful, and friendly.

The Variations of the Fairy Tattoo

These designs are representative of innocence, nature, grace, and freedom. They tend to embody transformation and rebirth, symbolizing a change in one’s life.

The popularity of dark characters has spawned the goth fairy, one that combines innocence and dark undertones. These usually are symbolic of a loss of innocence, one who is defiant, strong, and powerful.

Even darker than the goth fairy, the dark fairies thrive by creating chaos.

The crying fairy can be used to symbolize the loss of a loved one, battling an addiction, or having to turn the page on a chapter in one’s life. These designs embody sadness, representative of a broken connection with a loved one.

The most iconic of all fairies, Tinkerbell can be used to represent youth, playfulness, even a flirtatious side.

Since nature and the fairies are considered to be one in the same, this is the perfect concept for those who love everything about nature and the outdoors. These can represent longevity, love, passion, energy, and warmth.